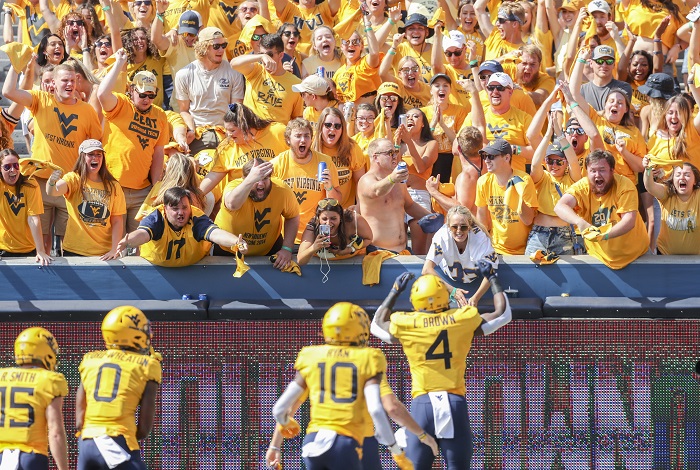 The West Virginia Mountaineers hosted Virginia Tech in an old Big East rivalry on Saturday, and WVU hung on for a 27-21 victory. WVU nearly blew a 27-7 lead at home, but in the end the Mountaineers were able to pick up a Top 15 win, which was desperately needed in Neal Brown’s third year on the job. While there are things to be excited about in Morgantown, there are still concerns for a team trying to take that next step as a program.

So with that being said, here are three thoughts on West Virginia’s win at home on Saturday.

1. Jarret Doege still has much to prove

WVU arguably won this game in spit of QB Jarret Doege’s performance. Especially late in the game, there was the fumble by Doege early in the fourth quarter, and then his interception on third down deep in WVU territory with 2 minutes left was absolutely horrendous. The broadcasters gave him the benefit of the doubt, blaming his “competitiveness”, but that’s being really polite. It was a bone-headed move given the situation. WVU’s defense had been playing really well all day, and not giving them the chance to win the game and forcing Virginia Tech into a long drive to win the game was poor game management. Doege finished his day going 15/26 for 193 yards, two touchdowns and one interception. But if this team is going to compete in the top half of the Big 12 Conference, Doege needs to take that next step as a quarterback, which he did not show on Saturday.

2. Leddie Brown is The Man in Morgantown

I wrote in our preview of this game earlier in the week, “Leddie Brown is the engine of the WVU offense. They need him to get going early to try and ease the pressure on the passing game.”

Well, Brown did just that. Right on cue, on WVU’s second play of the day, he took it 80 yards to the house to put the Mountaineers up 7-0 and set the tone for this game. That got the Virginia Tech defense jittery, and on the second drive, after a Brown four-yard run, Doege found Bryce Ford-Wheaton for a 29-yard touchdown, putting the Mountaineers up 14-0 in the first quarter. It was a lead they would never relinquish. Brown finished with 19 carries for 161 yards and a touchdown, while also finishing with 3 catches for 35 yards. As a result, he racked up 196 yards on the day. The offense will continue to go as afar as Leddie Brown will carry them, at least until QB play proves otherwise.

While I still don’t know if this unit can be as good as last year’s was, it sure did look really good on Saturday against Virginia Tech. The Mountaineers piled up 13 tackles for loss and six sacks against the Hokies. Jared Bartlett led the way with an incredible game finishing with three sacks and three tackles for loss. Taijh Alston, Jordan Jefferson and Sean Mahone were all in on the mix. And when the Mountaineers needed its defense to step up after a Doege fumble and interception in the fourth quarter, the defense forced turnovers on downs in both instances. Regardless, WVU fans should be very encouraged by the defense and how it will be able to keep them in games throughout the Big 12 season.