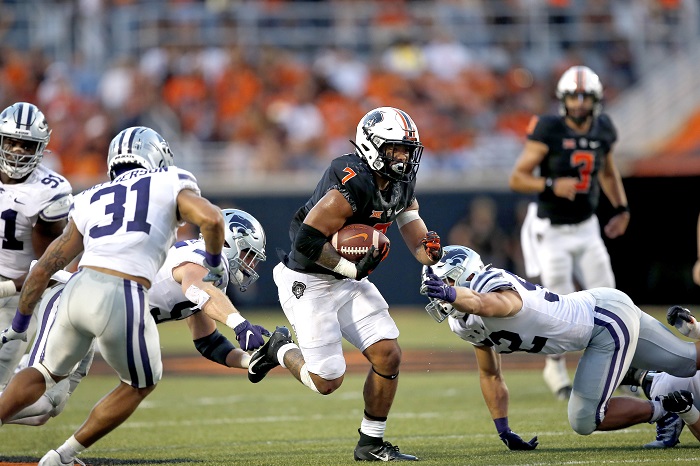 Week 4 of the Big 12 Conference football season saw the “unofficial” kick off to league play with four conference games on the schedule and there were plenty of questions to be answered. It was great to get conference play going in full force with Texas vs. Texas Tech, Baylor vs. Iowa State, Oklahoma State vs. Kansas State and Oklahoma vs. West Virginia all on the schedule for in-conference action. Considering two of these games were decided by a total of five points, it was a great kick off to the league schedule.

So while there’s so much to recap after Saturday’s action, here are my top five takeaways from Week 4 in the Big 12 Conference.

Is Texas the Best Team in the Big 12?

Seriously, yes, I’m asking. That’s how crazy it appears the Big 12 is going to be this season. Plus, their blowout loss to Arkansas doesn’t look to bad after Arkansas just beat Texas A&M and is likely to be ranked in the Top 10 by next week. The Longhorns dominated Texas Tech 70-35 on Saturday, with Bijan Robinson continued to prove he’s the best running back in the conference (Sorry Breece and Deuce). Meantime, the switch from Hudson Card to Casey Thompson at quarterback is looking like a great move by Steve Sarkisian. Although some might say he should’ve just went with Thompson from the start. Regardless, Texas is playing really well the last couple of weeks.

With all that praise, the Longhorns aren’t a great football team, but thus far in the Big 12 season, “great” doesn’t appear to be necessary to win this league in 2021.

Baylor is Indeed for Real

In last week’s five takeaways, I posed the question as to whether or not Baylor was for real after their 3-0 start. It turns out, after beating Iowa State on Saturday, they are, in fact, for real. The Bears did it by winning in the trenches, not settling for field goals and just doing more with less, literally, as BU was outgained by 200 yards.

In a wide-open Big 12, why the heck not Baylor as a contender? I can very easily make a case for the Bears based on what I saw from them on Saturday against Iowa State (along with their performances against lesser opponents through the first three games).

Dave Aranda has this program being built impressively on both sides of the ball, with the offense, led by Gerry Bohanan, looking better each week, while utilizing an impressive running game led by Abram Smith. And on the other side of the ball, their bend-but-don’t-break style proved to work well on Saturday, limiting Iowa State to multiple field goals that proved to be the difference in the game. I’m excited to watch this team the rest of the way.

This is probably a thought worth expanding on further during the week, but every Big 12 quarterback is looking pedestrian in their own way right now. Forget Oklahoma QB Spencer Rattler winning a Heisman Trophy, that’s a distant memory after he started the season as the betting favorite. Brock Purdy is missing throws he can’t miss as a senior multi-year starter. Skylar Thompson and Tyler Shough are injured. Jarret Doege, Spencer Sanders and Max Duggan haven’t exactly shown great progression. The two quarterbacks I’m most excited by in the league, at the moment, and going forward, are Texas’ Casey Thompson and Baylor’s Gerry Bohanon. I still believe Rattler ends up with the best stats in the league based on his coach and his offense, but the inconsistency is hard to watch. Regardless, this is a down year for the Big 12 at quarterback. However, it’s an incredibly strong year for the Big 12 at running back, with guys like Bijan Robinson, Breece Hall, Jaylen Warren, Zach Evans and Leddie Brown leading the way.

Forget a Playoff, is OU Even a Lock for a Big 12 Title Game?

Oklahoma winning games against Tulane, Nebraska and West Virginia by a combined 15 points is not something I had on my bingo card before the season started. As we noted last week against Nebraska, the Spencer Rattler regression is real, and it’s continuing. In fact, there were OU fans chanting for his back up Caleb Williams on Saturday night against the Mountaineers. That’s not fair, but such is life sometimes.

However, with the way the Big 12 remains completely up in the air (see takeaway No. 1), it would not shock me to see two 7-2 teams (conference records) playing for a Big 12 Championship in early December. That would mean the league is out of the College Football Playoff picture, but it sure would create an incredibly fun, roller coaster next two months or so for the Big 12. Every team, including Oklahoma, has its flaws. For OU, the offensive line is messy, the running back lacks depth, Rattler is struggling and wide receivers are having some issues getting separation. Thank goodness for this OU defense, or this team could easily be 2-2 or even 1-3.

How Does Mike Gundy Do It?

Speaking of teams that should have different records, Oklahoma State was a few plays away in the non-conference from being 0-3 instead of 3-0. It was probably the least impressive 3-0 start in the nation. Then, his team gets set to open up Big 12 play as a nine-point favorite at home, suckers like me bet the crap out of Kansas State as an underdog, and Gundy just does Gundy things, rolling to an 11-point victory and making us all look like fools.

His defense is outstanding, and he maybe have found his next Chuba Hubbard in Jaylen Warren, although Warren is bigger built than Hubbard and can help a team grind out games much more than Hubbard was able to. As our own Dave Beall wrote leading into this match up, if Mike Gundy pulls the right strings this season, it could go down as one of his best coaching jobs of his career in Stillwater.

And after watching this team play on Saturday, where once again they went scoreless in the second half for a second-straight game, yet the final result never seemed in doubt, that doesn’t seem so far-fetched anymore.