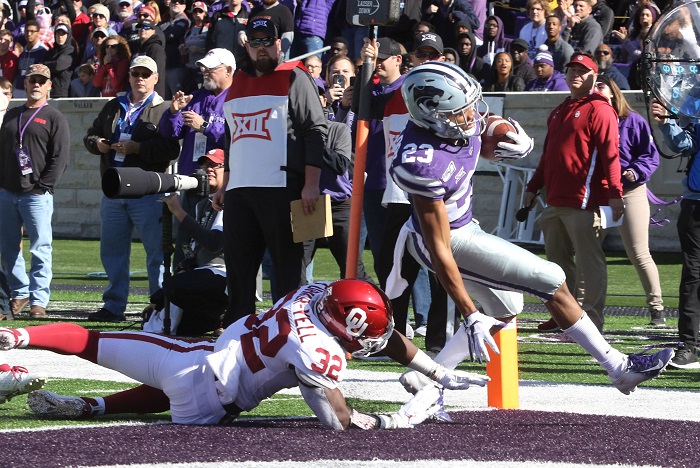 Here is everything you need to know about the upcoming Big 12 match up in our Kansas State vs. Oklahoma preview and prediction.

Vaughn is the Wildcats’ leading rusher with 393 yards on 75 carries (5.2 avg.) and five touchdowns. The sophomore was KSU’s leading rusher a year ago (123 for 642; 7 TDs). Although being held to 22 yards on the ground against Oklahoma State last week, Vaughn caught five passes for 73 yards and a touchdown.

The senior kicker averages 44.3 yards per punt, with five of his kicks landing inside the 20-yard line and another five of 50-plus yards. Zentner also performs kickoff duties for the Cats, and 15 of his 20 kickoffs have been touchbacks.

The sophomore leads K-State with 4 sacks and 2 forced fumbles. Anudike-Uzomah ranks 19th nationally and second in the Big 12 in sacks.

A transfer from Arkansas, Woods led the Sooners with 8 catches for 86 yards against WVU. He caught passes on consecutive plays (35 and 12 yards) to set up a field goal to allow OU to tie the game at 10-10 in the third quarter. His 35-yard reception helped Oklahoma overcome a third-and-five situation to move the chains. Woods also had two more clutch grabs in the fourth quarter setting up another field goal.

Brkic drilled the game-winning field goal as time expired to lift the Sooners to a 16-13 win over West Virginia last week. This year, the redshirt junior has hit 8 of 10 field-goal attempts, and four of them from 51 yards or more. Brkic also has connected on all 14 PAT tries. His career marks include 45 of 53 (85%) field goals and a perfect 100 percent of 115 PAT attempts.

DTY has a team-high 9 tackles against the Mountaineers, including one for loss. He also picked off one pass and broke up another. The senior leads the team with 25 tackles in four games so far. Turner-Yell left the game with an injury in the third quarter, and coach Lincoln Riley reported the injury is not severe, which is good news because DTY has been a solid safety for the Sooners the past four years.

After a 3-0 start, K-State lost 31-20 to Oklahoma State last weekend. Much of the loss was attributed to poor quarterback play and lack of a running attack. Sophomore Will Howard completed 4 of 12 passing for 50 yards. Howard also fumbled in the end zone, giving the Cowboys a gift of six points in the first quarter. After a Howard injury, sophomore Jaren Lewis took over and completed 10 of 19 passes for 148 yards with one touchdown and interception. He also was sacked twice. The Cats’ running game was held to 62 yards on 25 attempts. After allowing 31 points in the first half, KSU’s defense shut out OSU in the second half. The offense needs to play a grind-it-out kind of game to have a chance, if not the defense will be too gassed by the second half to keep up.

Brkic’s field goal last weekend was the first walk-off field goal in the school’s history. After West Virginia made a threat to break a 13-all tie late in the game, its center made a couple of miscues that helped the Sooners. WVU drove to the OU 28 when Wyatt Milum was whistled for an illegal snap count. Then, Milum quickly snapped the ball to his quarterback on the next play, and the ball rolled 21 yards back to the WVU 46. The Mountaineers were forced to punt, and the Sooners began at their 8-yard line. OU QB Spencer Rattler, who was much-maligned for most of the game, was flawless in the final drive. Rattler was 6 of 6 for 54 yards to help Oklahoma reach the WVU 12-yard line to set up the winning kick. OU just needs to get its offense back on track. The defense is playing outstanding. If Spencer Rattler plays to the level that was expected before the season, OU rolls.

Last year, the Wildcats trailed OU, 35-14, late in the third quarter. K-State scored 24 unanswered points the rest of the way to stun the third-ranked Sooners to claim its second straight win over Oklahoma. QB Skylar Thompson completed 18 of 25 passes for 334 yards and a touchdown, in addition to running for three more. Two years ago, KSU knocked off No. 5 Oklahoma, 48-41, in Klieman’s inaugural season as the Wildcats’ head coach. Down, 48-23, the Sooners scored 18 unanswered points but failed to recover the onside kick inside with 1:43 to go.

The Wildcats no doubt miss Thompson who was sidelined with a knee injury early in the second game of the season. If he can play this weekend, he could provide a problem for the Sooners’ defense, which ranks 14th against the run (75.2 ypg) and 67th against the pass (221.8 ypg), but it’s highly unlikely that will happen.

Chemistry appears to be a problem for Oklahoma’s O-line. It hasn’t produced huge running lanes for Kennedy Brooks and Eric Gray. West Virginia held the Sooners to 57 yards on 28 attempts—2 yards per carry. Tennessee transfer Wayna Morris replaced Anton Harrison at left tackle in the third quarter, and he was crucial in helping Rattler maintain his poise on the winning drive.

OU assistant Bill Bedenbaugh needs to get his O-line to be a more cohesive unit this week, or it could be a long day for the Sooners’ first road test. With that being said, it may not be pretty at times, but Oklahoma will leave Manhattan with a comfortable win.