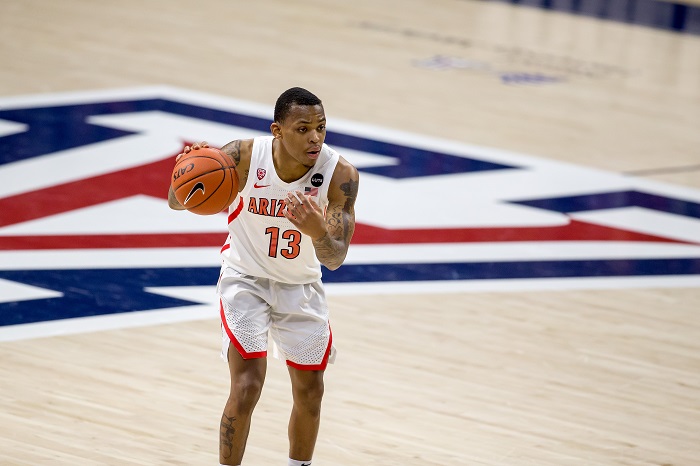 The transfer portal changed everything in college basketball. Not just the transfer portal, but the new rule that essentially allowed players to transfer once without having to sit out. That, plus the extra year of COVID-19 eligibility, changed the face of the Big 12 for the 2021-22 season.

Ordinarily, HeartlandCollegeSports.com highlights the best transfer for each team. Well, it’s a new world. This year, we highlight the Top 10 overall transfers entering the Big 12 Conference in 2021-22 (in alphabetical order).

Baylor lost four guards from last year’s national championship team, so bringing in Akinjo as a transfer was a perfect opportunity for the Bears to replenish that depth. Akinjo averaged more than 15 points per game for the Wildcats last season and looks to be an immediate starter alongside holdover guard Adam Flagler. Akinjo, a 40 percent 3-point shooter, has the potential to be a first team All-Big 12 performer. But, then again, so does just about everyone on this list.

It took Texas head coach Chris Beard all of two weeks to lock down Allen, who was a star at Utah before deciding to transfer to Texas. Last season he led the Utes with 17.2 points and 6.4 rebounds per game. He also had 3.9 assists. He earned First-Team All-Pac-12. He started 82 of his 85 games at Utah. He joined a Texas team that needs to rebuild its entire frontcourt after it bolted for the NBA. Allen is a huge start.

One of the most coveted transfers on the market, Carr flirted with the NBA before returning for another season of college basketball. He was already in the transfer portal and was deciding between a handful of schools, and Texas won out. After averaging nearly 20 points per game for Minnesota last season, Carr looks like a lead-pipe lock to start alongside Andrew Jones and Courtney Ramey. He slides perfectly into the spot vacated by Matt Coleman III. Carr’s impact should be immediate.

Coleman-Lands is that rare player who is entering his seventh year in college basketball. Yes, — SEVENTH year. He was at Iowa State last year and was a 2021 All-Big 12 Honorable Mention selection who was second on the team, and 10th in the Big 12, in scoring at 14.3 points per game. He led the Cyclones with 58 3-pointers made. He can come off the bench and he can start and he can make an impact either way.

Curry comes to a West Virginia team that has two quality holdover guards in Sean McNeil and Taz Sherman. But, Curry’s track record ensures he’ll get a shot, either as a starter or a primary backup. He led Old Dominion in scoring at 15.7 points per game, along with steals (37) and assists (71). The All-Conference USA Second Team is a high-quality shooter and you don’t want to put at the free-throw line.

The Sooners got a package deal with Tanner Groves, who brought his brother, Jacob with him. If you saw EWU play Kansas in the first round of the NCAA Tournament, you know WHY other teams wanted Tanner Groves when he hit the transfer portal. The Big Sky Conference Most Valuable Player last season, he averaged 17.2 points per game with 8.0 rebounds per game. Then, against Kansas, he went off for a season-high 35 points. With the mass exodus out of Norman, he should be an immediate starter.

Martin decided to use his extra year of eligibility and transfer to Kansas. That makes him the fifth starter for The Jayhawks, alongside their four holdover starters from last year. Why? Well, Martin was a three-time All-Pac-12 performer at Arizona State, averaged more than 19 points per game last season and averaged more than 21 points per game in Pac-12 play. You try keeping this guy on the bench for more than a couple of minutes a game. Martin came to Lawrence to help The Jayhawks win a title (and not just a Big 12 title).

You’re sensing a theme by this point. Texas owned the transfer portal as far as the Big 12 is concerned. Mitchell transferred to Texas in June after scoring 18.8 points and pulling down 7.2 rebounds per game for the Minutemen last season. That’s a carbon-copy of his numbers from the previous season. So he’s been a remarkably consistent big man. Look for him and Allen to be the starters for Texas when the season begins.

Obanor transferred to Texas Tech in July, and the Red Raiders were thrilled. Obanor made a national impression during the Golden Eagles’ run to the Sweet 16. That included 30 points against Ohio State, 28 points against Florida and three straight double-doubles to end the season. He averaged 18.7 points and 9.6 rebounds per game last year and he will be eager to prove himself at the high-major level after three quality seasons at ORU.

Warren could start or he could come off the bench at Texas Tech, depending upon how first-year head coach Mark Adams wants to line up his team. But, Warren comes to Lubbock with credentials after he averaged 21.2 points, 6.3 rebounds and 2.1 steals per game during his senior season at Hampton. He’s going to play. And he’s going to play a lot. And the Red Raiders need that.