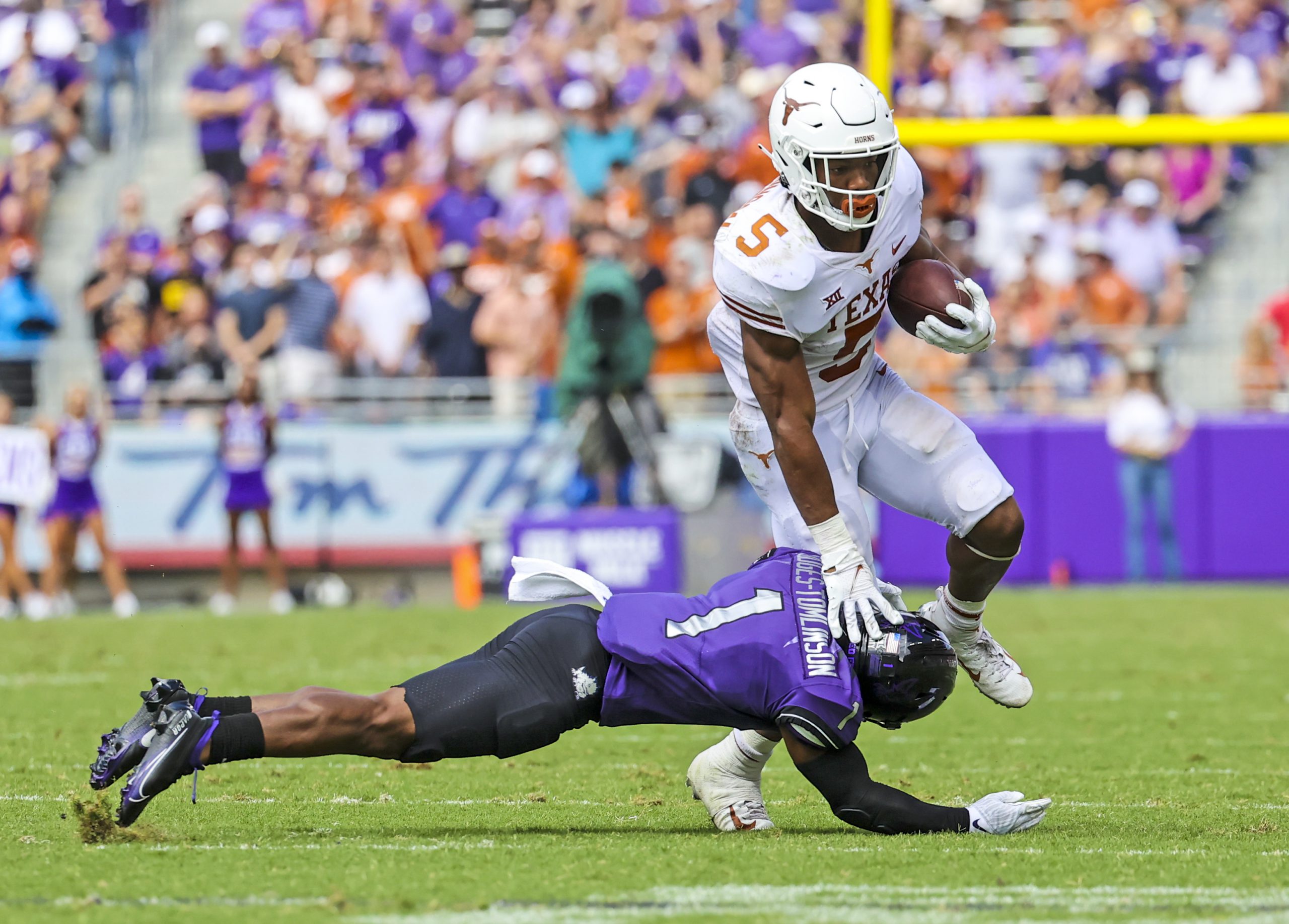 Since TCU joined the Big 12 Conference back in 2012, the Texas Longhorns have a 2-7 against the Horned Frogs heading into Saturday’s game. You can now change that to 3-7 after today and 2-2 in the last four seasons.

There was plenty at stake for both sides as Texas was looking to start 2-0 in Big 12 play before facing Oklahoma and TCU was in need of a big win after a disappointing loss against SMU last weekend. In the end, Texas got the 32-27 win in Fort Worth and here are my five thoughts from the game.

Going into this game, I know Bijan Robinson was a good football player. He was a five-star high school prospect for a reason and after a good freshman season, he is following it up with a great start to his sophomore campaign. Against TCU, Bijan was able to run for 216 yards and two touchdowns while averaging 6.2 yards per carry. He made plenty of defenders miss and always seem to have a knack for getting extra yards after contact. Today, he put the offense on his back. I know it is early but so far, I think he belongs in the Heisman conversation.

2. What is Wrong with the TCU Defense?

Last week against SMU, TCU gave up 350 yards on the ground. That is not normal for a Gary Patterson defense, and they knew all week long that Texas was going to come to Fort Worth and run the football. Despite knowing that, they let the Longhorns rush for 250 yards on Saturday and had no answer for Bijan Robinson.

For whatever reason, TCU seemed to limit the carries for the outstanding running back. Coming into this game, people were only talking about Bijan Robinson, but Zach Evans was also a five-star running back coming out of high school. Quietly, Zach has been having a fantastic 2021 season and he displayed his skills today with 113 yards and a score. While he did average 7.5 yards per carry, he only got to run the football 15 times today which was one less carry than Max Duggan who had 33 rushing yards. At some point, this offense needs to trust Zach Evans and let him do his thing.

Texas came into this game with a 95% touchdown rate in the red zone. The Longhorns had plenty of opportunities to score touchdowns today and had to settle for four field goals. Time and time again TCU would get a key stop that kept them in the game. If not for all those stops, this score may have been ugly. I know TCU struggled overall on defense, but they seemed to tighten up inside the 20.

I have been critical of officiating in this conference, but this was the first time this season where I felt like it dominated the game. There were eleven penalties in the first half alone and sixteen when the game was over. If they were legitimate penalties that were flag worthy, I would understand but there were far too many tacky calls today. When that happens, it becomes less about the players on the field and more about the officiating. No offense to referees but I don’t want to see them yapping their flaps all game long and it was bad for both sides.