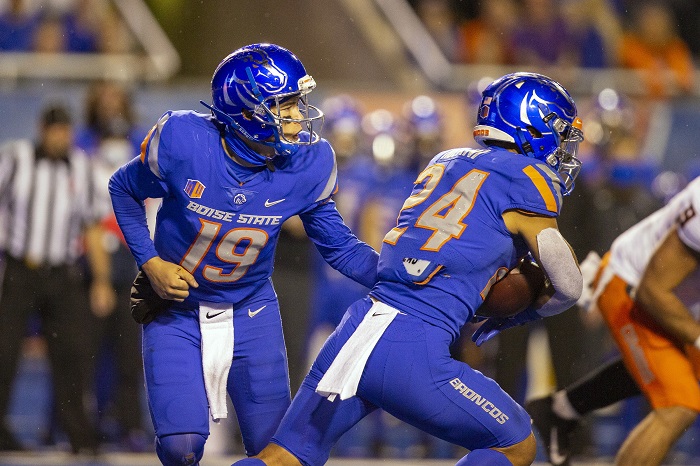 Should the Big 12 Conference go after the ‘Mountain West Four’ now and call it a realignment, now that those four teams have turned down the American Athletic Conference?

It’s a question worth discussing if you’re the Big 12. The invitations to BYU, Cincinnati, Houston and UCF were needed, given the landscape at the time. Those four teams, as I wrote a month ago, represented the Big 12’s best chance at putting together the best possible product for the TV networks that will inevitably pay them less for their games without Oklahoma and Texas.

But the Big 12 remains, as one might expect, vulnerable.

Big 12 commissioner Bob Bowlsby didn’t rule out further expansion after inviting the league’s newest members. But it wasn’t clear if that meat before the conference landscape shifted again, or after. And it could shift again.

If the ACC, or the Big Ten, or the Pac-12 — or even the SEC — decide to expand further, that will impact the Big 12, namely because those leagues will come after its current or future members. I could see the ACC being interested in West Virginia, Kansas or Houston. The Big Ten would have interest in Kansas and Iowa State because of the schools’ American Association of Universities membership. The Pac-12 would be happy to scoop up the rest and kill the league completely.

So, does a proactive move make sense?

Air Force and Colorado State reportedly passed on American Athletic Conference membership last Friday. Earlier that week, Boise State reportedly did the same because it was hopeful that the Big 12 would come calling. San Diego State has received plenty of chatter as a realignment target. For all four schools, a switch to the Big 12 would represent a financial boost, as the Mountain West TV contract only pays each school about $4.1 million per year.

Why these schools for the Big 12? Well, some of them have TV markets to offer. As I wrote in my Colorado State piece, it’s an hour from Denver, and that provides access to the No. 16 television market per Nielsen. San Diego State, while seemingly out of the Big 12’s current geographic footprint, is in the No. 27 TV market.

But overall state growth should be taken into account, too. The Western Athletic Conference used that model when it expanded for football, which it started re-sponsoring at the FCS level this year. Instead of focusing on TV markets, the league focused on where the population growth was happening and invited schools from Texas and Utah.

Utah, according to data collected to AAA, was the fastest-growing state in the nation from 2010-20. Texas was No. 3.

For the Big 12, Colorado saw a 14.8 percent population increase during that span, sixth among data collected. That loops in Air Force. Located in Colorado Springs, it’s a little over an hour from Denver. In addition to the state’s population increase, like the other service academies and future Big 12 member BYU, the Falcons have a national following the league can tap into.

As for Boise State, the Broncos don’t have the TV market the other three programs do (No. 101 per Nielsen). But, the Broncos have cultivated a national following the past 15 years, thanks to constantly being a thorn in the side of Power 5 teams (ask Oklahoma and Oklahoma State for its receipts) and the state’s overall population growth. Guess which state was No. 2 in population growth in that AAA sample? Yep, Idaho.

Inviting the four schools now does move the conference to 18 teams in the near future, and 16 teams once the Longhorns and Sooners leave. Our Robert Graves contemplated this prospect a month ago. It sets the lineup for the new TV contract. And it gives the league some peace of mind if others leave.

How do you divide up the divisions? Well, take the Mountain West 4, BYU, Kansas, Kansas State and Iowa State and put them in one division. Then take the five Texas teams, Oklahoma State, West Virginia and UCF and put them in the other. But let’s be open to other ideas, and Graves has ideas about that, too.

But the Mountain West Four appear to be the most attractive option right now. They increase the Big 12’s presence as a ‘nationwide’ conference and makes the league look pro-active instead of reactive.

And that’s something the Big 12 could use right now.