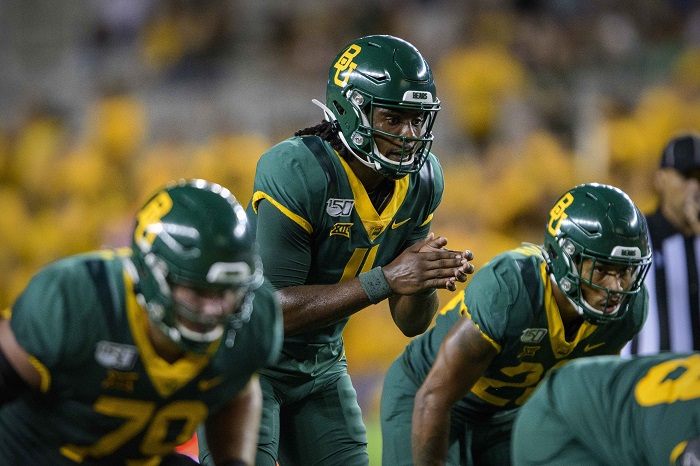 Here is everything you need to know about the future Big 12 matchup between BYU and Baylor.

It was the rushing attack which failed BYU against Boise State by coughing up three fumbles. Hall, who returned from injury, racked up a career high 302 passing yards during the team’s first defeat of the season. Turnovers will be critical against Baylor. The Bears have yet to throw an interception, yet are tied for 11th nationally with eight pickoffs. Hall will have to protect the football.

Wilgar is second on the team in tackles. While freshman, and fellow linebacker, Ben Bywater tops him in that category, Wilgar’s game statistics are impressive in more categories than just one. The sophomore from St. George, Utah has three pass break-ups, a quarterback hit and a fumble forced. He also bests Bywater in tackles for loss at 6 for 20 yards. Make no mistake though. This linebacker crew is young and they will be a force for years to come.

Ebner is all over the place. The only thing he has yet to do this season is throw a pass. Ebner is an all-purpose player whose the team’s leader in all-purpose yards. He’s already returned a kickoff for a 98-yard touchdown, which ended up being crucial to a 31-29 victory over Iowa State. He also returned a punt for 50 yards against Kansas. He excels in special teams, but that’s not the only place. Ebner is the only running back in Baylor history to eclipse 1,000 yards receiving. He’s smashed the record currently standing at 1,308 yards and 10 touchdown receptions. Did we mention we’re talking about a running back? Oh yes, he’s notched 401 yards on 66 carries for an average of 6.1 yards per carry. If the 401 yards isn’t impressive to you in six games, mind you he shares the backfield with Abram Smith. Combined, the two ball carriers have racked up over 1,000 yards in just six games. Yeah, that’s impressive.

BYU committed four turnovers in its loss to Boise State. J.T. Woods is salivating at the opportunity in this game. He has forced three turnovers this year, including a pick-six, which just so happened to be the Bears’ first touchdown of the season. He has also returned a fumble 97 yards for a touchdown. In two non-conference games, he has two touchdowns. It would please Woods to achieve the trifecta: three touchdowns in three non-conference games.

Welcome to the Big 12 Conference! What better way to be introduced into the conference than face the very team who is likely to become BYU’s newest rival: Baylor. For Baylor, they’ll want to dismantle BYU. The seven other current Big 12 teams who will remain in the conference will be hoping that BYU plays the Bears close in a highly competitive game.

First off, the Associate Press is slow to respect the Bears. They only garnered 62 votes this week while their only loss is to an undefeated Oklahoma State team on the road. Meanwhile, three SEC teams with two losses are in the Top 20. Additionally, a two-loss Clemson team is ahead of Baylor. Where’s the love? Other story lines include the fact that Baylor will not want to be the first team to lose to a new member. Texas Tech dispatched Houston fairly easily after halftime in week one. We can also mention that Oklahoma State defeated Boise State on the road, whom holds a road victory over future Big 12 member UCF. Finally, Baylor is seeking bowl eligibility this week as a victory gives the Bears six wins.

Baylor is not so much an offensive juggernaut as it is a defensive stalwart. The Bears force turnovers, play quality special teams, and have a decent offense. If turnovers is the name of the game, BYU must avoid a repeat of the Boise State game. They will have to protect the football and I just don’t see that happening against a Baylor team that prides itself on turnover margin. BYU doesn’t get blown out for lack of talent here. BYU gets blown out because it fails to protect the football. If the Cougars protect the football, they have a chance to escape Waco with a victory.