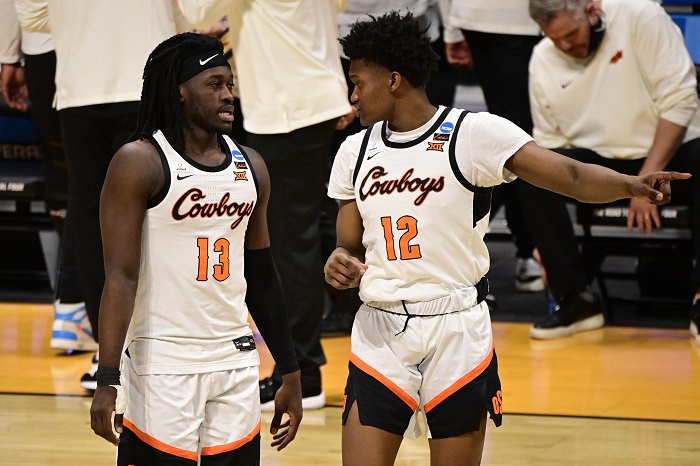 Isaac Likekele is a part of our Heartland College Sports Big 12 men’s Top 25 returning players countdown as we get closer to the 2021-22 college basketball season opener.

Where he left off: Likekele’s numbers took a bit of a step back from 2019-20, in part because of the scoring leadership of Cade Cunningham. But, his complete game was on full display once again.

The All-Big 12 Honorable Mention selection was the highest-rebounding guard in the Big 12, and Oklahoma State’s leading rebounder, with 6.6 boards per game. He led OSU in plus/minus (plus-four per game), was seventh in the Big 12 in assist-to-turnover ratio (plus-1.6) and was 11th in assists (3.6 per game). But his biggest improvement came from the 3-point line. In 2019-20, he shot just 21.4 percent from the arc. Last season he shot 44.4 percent.

Where he’s headed: Oklahoma State head coach Mike Boynton Jr. told College Hoops Today’s Jon Rothstein that Likekele had to assume other duties as Cunningham became the team’s focal point and primary ball handler last season. To that end, Likekele focused on defense and rebounding. Now that Cunningham is gone, Boynton expects Likekele to fit back into that primary point role he had in 2019-20. He returns to that role with some refined skills on the glass and on defense. But what could be most exciting to the OSU offense was Likekele’s 3-point percentage. In fairness, he only shot 18 3-pointers last year. But, if Likekele gets additional volume from the arc and can maintain that percentage, he’ll be incredibly hard to deal with.

Big 12 Football Coaches Power Rankings After Week 6
Spencer Sanders Must Show Up to Avoid 2020 Déjà Vu vs. Texas
To Top