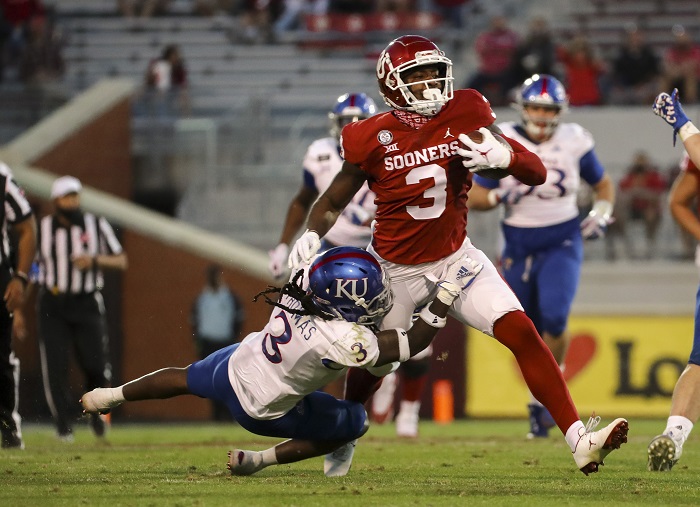 Here is everything you need to know about the upcoming Big 12 match up in our Kansas vs. Oklahoma preview and prediction.

Rankings: OU No. 3 in AP poll and No. 2 in AFCA Coaches Poll; KU unranked.

Fun Fact: The Sooners own a 15-game winning streak dating to last year, the longest current streak in the nation. They also own a 16-game win streak over the Jayhawks and a 76-27-6 advantage in the series.

In his first start against the Horned Frogs, the freshman showed the poise of a seasoned veteran. Williams completed 18 of his 23 passes for 205 yards and 4 TDs. He also ran for 66 yards and another score. Such performance set an OU team record for most single-game passing yards and touchdowns by a freshman QB. After coming off the bench in the second quarter against Texas two weeks ago, Williams’ season total passing statistics are 34 of 48 (71%) for 507 yards with 6 TDs and no picks. He also has rushed 13 times for 154 yards (11.8 ypc) and 2 TDs. Just one week after being named the Big 12 Conference Newcomer of the Week, Williams was selected the league’s Offensive Player of the Week against TCU.

The redshirt junior got his second start last Saturday and continued to show his tremendous running talent by carrying the pigskin 20 times for 153 yards and a touchdown. Brooks has rushed 99 times for 688 yards (6.9 ypc) this year with 7 touchdowns. Since getting the starting nod against Texas, he has carried the ball an average of 8.2 yards the last two games.

The redshirt sophomore is fast becoming another reliable receiver for the Sooners. After sitting out most of 2020 with an injury, Haselwood leads Oklahoma with 27 receptions for 238 yards (third-most yards) and a team-high 5 TDs. Last weekend, Haselwood grabbed 6 passes for 56 yards and three scores.

The senior logged 7 tackles against TCU with 1.5 for loss and a fumble recovery that he returned for 37 yards. White currently is third on the team with 36 stops, including 3.5 behind the line of scrimmage and last week’s fumble recovery.

Just a true freshman, Neal leads KU with 318 yards (4.6 ypc) and 2 TDs. After earning the starting RB nod three weeks ago, his stat line reads: 47 carries for 244 yards (5.2 ypc) and one touchdown. He rushed 17 times for 107 yards and a score in his starting debut against Duke.

This year, the senior end has recorded 4.5 tackles for loss, including 2.5 sacks, 3 QB hurries, 2 forced fumbles, and a fumble recovery. Johnson had 7 tackles, 2 sacks and forced a fumble last year against the Sooners.

The Sooners easily defeated TCU, 52-31 last weekend, but primarily due to the offense. I expected the defense to make a better showing against the Frogs, but it didn’t happen. TCU’s Max Duggan completed 20 of 30 passing for 346 yards and 4 TDs. OU defensive coordinator Alex Grinch didn’t dial up the pressure (only three QB hurries) as he did in the second half against Texas. The young guys in the secondary missed opportunities by not turning toward the ball as it descended toward the Frogs’ receivers. Oklahoma has several defenders out with injuries—safety Delarrin Turner-Yell, cornerback Woodi Washington, and corner D.J. Graham, who reportedly received a concussion last Saturday. Tackle Jalen Redmond also sat out last weekend’s contest. These dudes might not be needed against the Jayhawks this Saturday and might return against Texas Tech on October 30 or after OU’s bye week, which comes on November 6.

Kansas scored two touchdowns in the last minute to avoid a shutout against Texas Tech last week. Backup QB Miles Kendrick came off the bench with six-and-a-half minutes remaining and directed the two scoring drives against the Red Raiders reserves. Starting QB Jason Bean struggled by completing 11 of 21 for 80 yards and an interception. Kendrick finished 4 of 7 for 48 yards and the 2 TDs. Coach Lance Leipold, disappointed in his team’s 128 passing yards, said the passing game needs to get better. KU put up 238 yards through the air against Baylor and 323 against Duke but averaged just 127.5 against Iowa State and Tech. An inexperienced Oklahoma secondary might provide the Jayhawks with a chance to improve in the aerial game.

The Sooners’ offense averaged 29 points against their first four FBS foes under the guidance of Spencer Rattler at quarterback. In the last two games with Williams under center, OU has averaged 53.5. It will be difficult for the Hawks to neutralize Oklahoma’s offense, which has so many weapons. Williams is dangerous as a dual-threat QB. KU defensive coordinator, Brian Borland, has his work cut out against OU—how to stop Williams, who has a slew of receivers at his disposal. Seven Sooners have double-digit receptions combining for 134 catches for 1,619 yards and 15 touchdowns. And then there is Brooks, who has found his footing for 370 yards and 3 TDs the past two weeks. Let’s face it, the Jayhawks are not a good football team. If the Sooners take them too lightly, this contest could be closer than expected. In 2018, No. 6 Oklahoma, a five-touchdown favorite, beat the Hawks, 55-40. The following year, the Sooners were again ranked sixth when taking on KU and were favored by 32. Oklahoma escaped Lawrence by 25 points (45-20). The Sooners steamroll the Jayhawks in this one, once again.

Kansas State vs. Texas Tech: Preview and Prediction
Jennie Baranczyk Stepping Into Some Big Shoes at Oklahoma
To Top