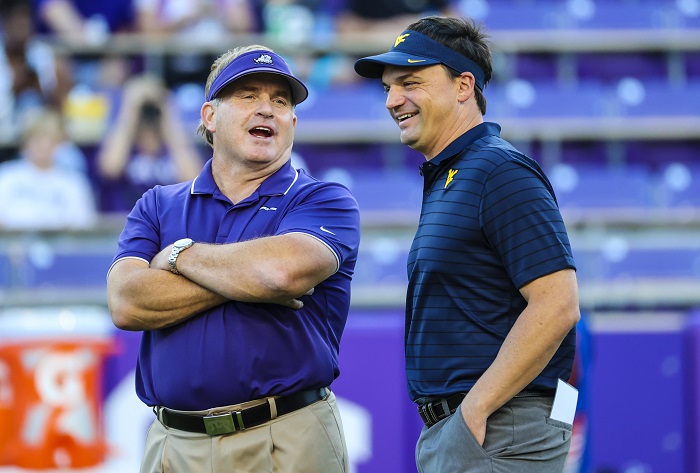 Week 8 of the Big 12 football season is in the books, and there is movement in our Big 12 Power Rankings. Week 8 saw Iowa State jump back into the Top 25 after beating Oklahoma State, OU struggled against Kansas, West Virginia stomped TCU and Kansas State came back against Texas Tech. Anyway, here is your weekly reminder that these rankings can fluctuate greatly on a week-by-week basis, based on how teams have performed in their most recent games and who they’ve beaten, not what we predict the final Big 12 standings to be and not what the preseason rankings were.

So with all that being said, here’s a look at our Big 12 Football Power Rankings heading into Week 9 of the season.

I know, Baylor fans are already mad. They’ve beaten Iowa State, yes, but they’ve also lost to Oklahoma State, who the Cyclones just beat on Saturday. Iowa State is finally looking like the team that we all expected back in August. But in typical Iowa State fashion, they wait until the month of October to turn things on. Brock Purdy is playing on a different level this month: He’s thrown seven touchdowns to zero interceptions, compared to four touchdowns and four picks in the opening month of the season. The Cyclones are still well positions to end up in Arlington come early December. Oh, and if you haven’t seen this video of Purdy soaking in “Sweet Caroline” after the game, please do yourself a favor and watch it here.

The Cowboys slide one spot after a hard-fought loss on the road in Ames against the Cyclones. Spencer Sanders actually played pretty well against a really good Iowa State defense, and if he can play like he did on Saturday, Oklahoma State should feel good about its chances of getting to Arlington for a Big 12 Championship Game as well. The quarterback position has been the missing piece for this team in recent weeks, but add that with Jaylen Warren at running back and this defense, and you’ve got a Big 12 contender.

The Baylor Bears were off this past weekend, but maintain the No. 3 spot this week ahead of a huge match up this weekend against the Texas Longhorns. It will be another good test for this Baylor program that continues to build under Dave Aranda.

Well the Sooners won their game on Saturday against Kansas. But that’s the nicest thing you can say about that performance in Lawrence, which needed a late controversial play to seal the victory. That’s unacceptable when you go into the game as a 38-point favorite. Hopefully for OU’s sake, it’s just a lapse in concentration for the weekend, but if not, then OU is due for a couple of losses down the stretch of the season.

Texas had the week off, and hopefully Steve Sarkisian worked with his team on the importance of finishing games. If only football games weren’t four quarters long, Texas would be flying high and leading the Big 12. Unfortunately for them, that’s not the case, as they’ve blown double-digit lead in their last two games against Oklahoma and Oklahoma State. Now it’s onto Baylor this weekend.

The Mountaineers leap up this list after an impressive road win at TCU. This offense looked as sharp as it had looked in weeks with Leddie Brown leading the way at running back. Also, the defense held TCU’s offense to 10 total points, despite the Horned Frogs having the third-best offense in the league coming into this game. I’m not sure if this game is more of an indictment on TCU than it is credit to anything Neal Brown figured out during his bye week, but we’ll get more clarity on that this week when WVU hosts Iowa State.

No team has moved less in the Power Rankings in recent weeks than Kansas State, who seems mired in the No. 7 spot. But K-State got off to a horrible start at Texas Tech, trailing 14-0 and 21-7 before storming back for a 25-24 win over the Red Raiders to get their first conference win of the season. It wasn’t always pretty, but it was much needed for Chris Klieman’s team, who had lost eight Big 12 games in a row dating back to the 2020 season.

The Texas Tech Red Raiders had a brutal weekend, blowing the aforementioned lead against Kansas State and heading into a stretch of four games against ranked teams to end the season. Then the season took another turn on Monday when head coach Matt Wells was fired. It’s not obvious what the direction is of this football program, but it once again has to hit the reset button as it chases the ghost of Mike Leach.

TCU continues to trend in the wrong direction of our Power Rankings. Some of us, and I’ll include myself, thought that TCU could be a dark horse team in the Big 12 Conference this season. That is turning out to be anything but the case, as TCU will be fighting for bowl eligibility this season. The Horned Frogs fell to 3-4 on the season and 1-3 in the Big 12 after losing to West Virginia 29-17 on Saturday at home. With the loss, TCU is now 13-18 in their last 31 Big 12 games. And what makes this season that much more frustrating for the TCU faithful is that the team isn’t playing Gary Patterson football. The defense is a mess, they lost the turnover battle on Saturday 3-0 and they had more penalties than their opponent. Not a good scene right now in Fort Worth.

I wanted to slide Kansas up this list because of how they played Oklahoma on Saturday, but I just could not do it. This team deserves a ton of credit for its performance against the Sooners, but they still lost the game and have one win on the season, so I’m keeping them in the No. 10 spot.