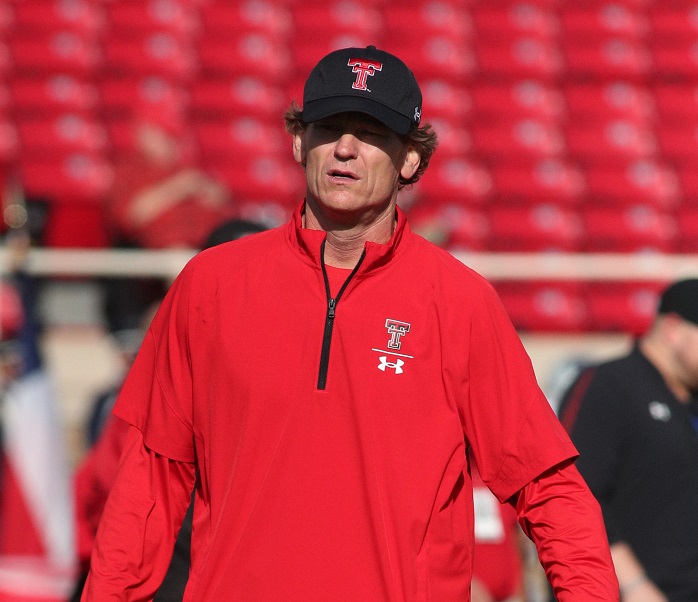 Matt Wells got fired in the middle of his third season with Texas Tech, so now it’s a question of who is going to be the next head coach of the Red Raiders.

One popular name that has received some attention is Sonny Cumbie. Texas Tech named Cumbie their interim coach on Monday and some people believe that the job could be his for the taking.

Jarret Johnson of Inside the Red Raiders believes that this is the perfect moment for Cumbie to show that he is right for the job long term.

“Sonny Cumbie has an opportunity,” Johnson said. “They’re playing Oklahoma in Norman. You win that game, which sounds impossible right now, but if you do, and anything can happen, that makes national news. That goes a long way in him getting an opportunity I think. You still have three games left against three ranked opponents. They have one of the toughest schedules remaining in all of college football, so he’s going to have his hands full there, but if he does win another couple of these games, he makes a pretty strong case for himself.”

“I know there’s some really influential people here in Lubbock that really like Sonny Cumbie and would like to see him become the next head coach.”

Cumbie, who is one of the top quarterbacks in Red Raiders history, was serving as the offensive coordinator and quarterbacks coach before his recent promotion. This is his second stint as a coach with Texas Tech.

Cumbie was an assistant coach from 2010-2013, starting as the inside receivers coach and then later serving as co-offensive coordinator and outside receivers coach. He then spent the next seven seasons with TCU where he started as.

During his time at TCU, the Horned Frogs had the second best conference record in the Big 12 at 38-25 and the Big 12’s best overall record of 58-30. They also had six bowl appearances in Cumbie’s seven seasons with the program.

Sonny Cumbie will be making his head coaching debut on Saturday as the Red Raiders take on the 8-0 Oklahoma Sooners.