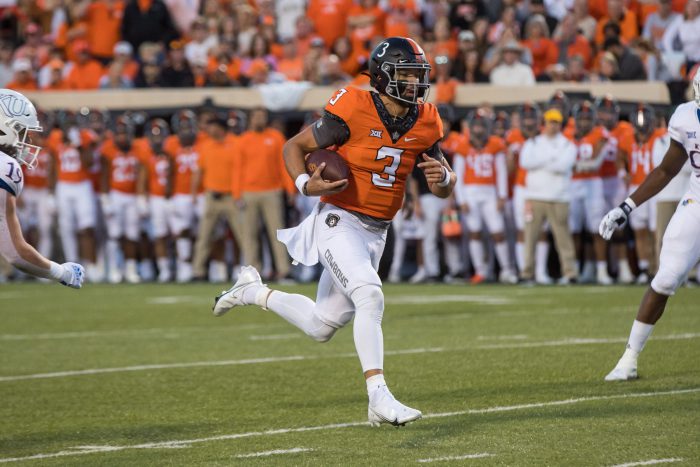 It was a full day of Big 12 action on Saturday that ended with an interesting night game. I am kidding of course because this week’s primetime matchup was Kansas taking on Oklahoma State in Stillwater.

While it may be Halloween weekend, nothing is spookier than a Kansas night game. Luckily for Oklahoma State, they had nothing to worry about as they cruised to an easy victory. Here are my four thoughts on Oklahoma State’s blowout win over Kansas.

After a heartbreaking loss in Ames last weekend, Oklahoma State needed a big bounce back win on Saturday and they got one. It was Halloween weekend and homecoming with Kansas coming to town. The setup couldn’t have been better for the Cowboys to succeed on Saturday night. It could have been easy for Oklahoma State to have a letdown performance after suffering their first loss of the season a week ago, but they got up early and kept their foot on the gas pedal for four quarters. I loved the mindset and focus of this team on Saturday night.

The score speaks for itself, but I am still impressed with the way Oklahoma State played. Spencer Sanders didn’t turn the football over and the offense rushed for 292 yards with Dominic Richardson and Jaylen Warren leading the way. On top of that, the Cowboys did what they do best which is play great defense. They shut down the Kansas offense from the start and kept battling all game long. Giving up only three points isn’t easy especially when you have backups playing for as long as they did. Also, they didn’t give up a single first down. I am not sure if I have ever seen that since I started covering the conference back in 2016.

3. Kansas Pulled a No Show

Remember that team that nearly stunned Oklahoma a week ago? I do but that team did not show up in Stillwater on Saturday night because they must have stayed in Lawrence. The defense was bad, but the offense somehow was worse. Jason Bean threw two picks and after completing just three of his ten passing attempts, Miles Kendrick took over and didn’t do much better. The Jayhawks couldn’t run the ball, throw the ball, or do much of anything. In fact, they didn’t even get a single first down in this game and they had just 49 yards of offense in the first half where they found themselves down 38-0 after two quarters. It was embarrassing even by Kansas standards.

4. Oklahoma State Still Has Plenty to Play For

After picking up the easy win, Oklahoma State is now 7-1 with four games left. They still have to play West Virginia, TCU, Texas Tech and Oklahoma. With Iowa State going down on Saturday, the Cowboys now jump ahead of them and are in second place in the Big 12. With their remaining schedule, there is no reason that this team shouldn’t be 10-1 going into Bedlam. Keep in mind, Iowa State still has to play Oklahoma and if the Cyclones lose, the Cowboys have some wiggle room to make their first Big 12 title appearance.