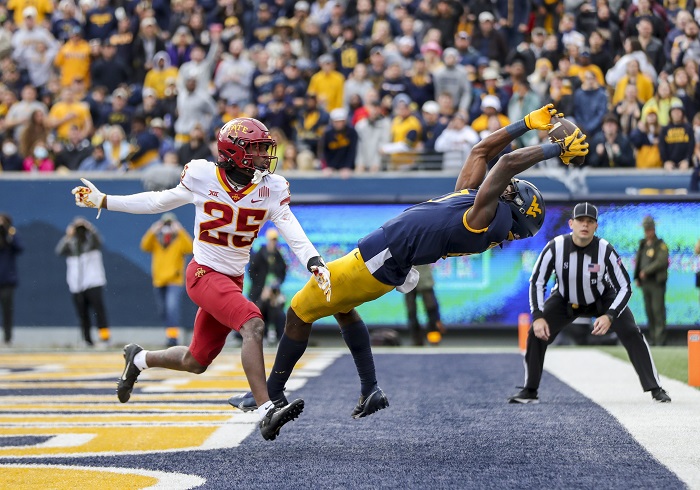 It was another wild weekend in the Big 12 from the off-field news to the on-field play. There was plenty of excitement on Saturday and I will break it all down here for you as I share the good, bad, and ugly from week nine in the Big 12.

Despite Gerry Bohanon not having his best game, Baylor found a way to beat their in-state rival. The Bears used their powerful rushing attack against the Longhorns, and it worked. Abram Smith was once again outstanding, and his 32-yard touchdown run in the fourth quarter helped seal the victory. Baylor was great on third down throughout the game and really took control of the second half. In the third quarter they found themselves down 21-10 and then managed to outscore the Longhorns 21-3 to end the game. They never lost their cool when they were down and found a way to win. Say what you want about this football team, but they are 7-1 with four games left. There is a good chance that Baylor gets to ten wins this season. Kudos to Dave Aranda and his staff.

I didn’t think West Virginia had a chance in this game and they impressed me on Saturday. Leddie Brown was good, but I must give credit to Jarret Doege and his wide outs. Doege fought back despite turning the ball over and his receivers Bryce Ford-Wheaton and Winston Wright Jr. came up big when their number was called. The Mountaineers did an excellent job controlling the game and despite giving up some big numbers, the defense held strong on third down allowing Iowa State to convert on just two of their twelve third down attempts. I didn’t see this win coming and now there is a good chance that West Virginia could make a bowl game by the end of the season.

There was no letdown this week as the Sooners crushed the Red Raiders for an easy win. The damage was done through the air as Caleb Williams threw for 400 yards and 6 touchdowns against Texas Tech. Even Spencer Rattler got to play in the second half. Wide receivers Marvin Mims and Mario Williams were the top two targets as they combined for 235 yards and three touchdowns. The defense also had a much-needed bounce back week and as the score shows, this game was never in doubt for the Sooners. They flat out dominated on Saturday.

While Kansas State scoring 31 points is a big deal, this game was all about the defense. They held TCU to just 12 points and shut down the TCU offense. Kansas State defensive end Felix Anudike-Uzomah had a monster day with four sacks and two forced fumbles. He was unstoppable and it was one of the best defensive performances I have seen since covering the Big 12. The Wildcats played a complete game and with the win, they move to 5-3. This is good news considering the fact that they play Kansas next weekend which should get them to six wins, but I do think this team could do more than just get to a bowl game.

It was beatdown from start to finish. Spencer Sanders didn’t even need to play in the second half because of the 38-0 score at halftime. The run game was key for Oklahoma State as they racked up nearly 300 yards on the ground. But the star of the show was the defense. They shutdown the Kansas offense and held them to just three points through four quarters. In this day of college football, it is hard to do that. Plus, they didn’t allow Kansas to convert a single first down and allowed just 143 yards. It was a dominate performance for the homecoming crowd.

It was a rough day for the Cyclones in Morgantown for plenty of reasons. The offense was a little spotty and luckily the big plays in the first half helped them out. They settled down in the third quarter scoring twice but then had a rough fourth quarter. Defensively, this may have been the worst game the Cyclones have played. They allowed West Virginia to convert nine of their fifteen third down attempts and the secondary got torched throughout the entire game allowing 370 passing yards. The second half adjustments didn’t work and as good as this defense has been, they were disappointing on Saturday. This team didn’t have their best game and I know officiating didn’t help but they need to look in the mirror for this one.

Outside of Xavier Worthy, this offense was fairly dull. Casey Thompson wasn’t great and Bijan was a non-factor in the game. I felt like they had a chance to put away the game more in the first half, but two turnovers didn’t help. Then the second half happened and even though they had 21-10 lead in the third quarter, they did what they do best this season which is blow leads. This was the third week in a row that Texas had a fourth quarter lead and didn’t win the game. Texas has a problem with finishing games and after the loss they sit at 4-4. There is no way this football team is finishing better than 6-6 this season. They had no business being in the Big 12 title discussion this season at all.

There is not much I can say here because this game was a blowout. Outside of Erik Ezukanma, no player in a Texas Tech uniform impressed me. The offense was bad and the only positive takeaway from this is that quarterback Donovan Smith got some reps. Defensively this team had no chance of stopping Oklahoma quarterback Caleb Williams. The only way to describe this game is embarrassing. Tech needs help quickly and hopefully they can make the right hire for next year.

Whether it was Max Duggan or Chandler Morris in at quarterback, it didn’t matter because TCU did nothing on offense to smile about. Other than the 61-yard run by Kendre Miller, the Horned Frogs didn’t do much at all. The offensive line did a poor job in pass protection, and they never could put together a decent drive because of it. I still have questions about the defense but the only thing I can say at this point is that this is a bad football team. From top to bottom, this is just not a very good football team, and I don’t think Gary Patterson is helping at all. I said it earlier in the week, but I do think his time at TCU should be coming to an end. They are staring in the face of a 4-8 season in Fort Worth. Also, where was this type of fight during the game?

The Jayhawks scored three points and didn’t have a single first down in the game. I don’t think I need to dive into anymore of this game. If you want, you can check out my four thoughts after the game. The score speaks for itself here and Kansas football should be embarrassed. Their season should end now.

It is not often that the Big 12 officials make it on here although that should be surprising considering the fact of how bad they have been over the years. On Saturday I thought they were awful in one particular game. In fact, it was the worst officiating in a Big 12 game I have ever seen. In no game have I ever seen three scoring plays be questionable, but I did in the Iowa State/West Virginia game.

It all started with this touchdown. It was reviewed and the call stood but when I keep watching it, I don’t think a foot got down.

Then this happened. The play clock hit zero for two full seconds before the ball was snapped. While it is bad, Iowa State defended the play poorly which there are no excuses for.

Finally, this may have been the worst one. This was ruled a fumble and after watching it, it appears that Breece’s elbow was down. This cost the Cyclones a score.

Now I am not making excuses here because Iowa State played poorly in that game. They lost and they need to look themselves in a mirror, but it is hard to win when crucial calls like that are blown. Those calls had a significant impact on the game, and it would be foolish to think otherwise. I know other teams won’t feel sorry for Iowa State and I will also say there were calls that went against West Virginia as well such as this phantom pass interference call.