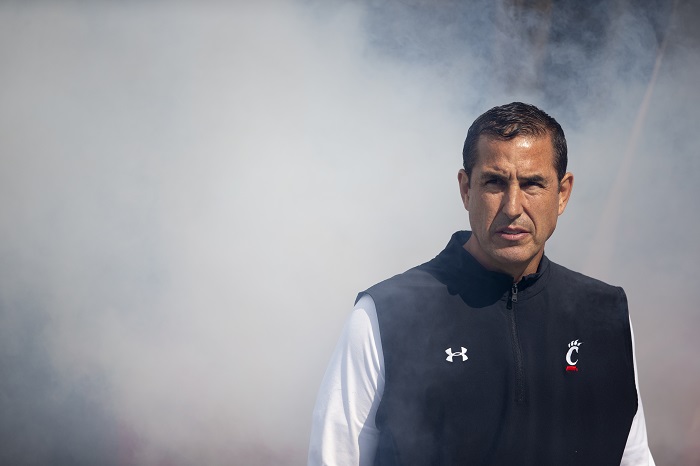 The year’s first College Football Playoff rankings are set to come out on Tuesday and there will be plenty of talking points.

While Georgia is a lock to hold the number one spot, everyone wants to know what will happen with Cincinnati?

Over the years, the selection committee has not been kind to any of the group of five programs. Remember UCF back in 2017? They went 12-0 during the regular season and were never even close to cracking the top four. In fact, they weren’t even in the top ten until they beat Auburn in the Peach Bowl.

The good news is that Cincinnati has the respect of the AP Poll as well as the Coaches Poll. Those two polls have the Bearcats at number two only behind Georgia but ahead of other programs such as Alabama, Ohio State and Oklahoma.

While it is great that Cincinnati is already considered a top two team to the other polls, that doesn’t mean the selection committee will do the same on Tuesday. They are notorious for showing little respect for group of five teams and it already appears that certain narratives are already being thrown out.

Cincinnati already has a top ten win over Notre Dame in South Bend and by the looks of it, the Fighting Irish will be a top ten team at the end of the year as well. That should provide a big resume boost when the rankings come out. However, it didn’t help that SMU lost to Houston on Saturday night because that will take away some of buzz of their big matchup on November 20th.

Outside of SMU, the Bearcats still have to play Tulsa, USF, and East Carolina. Those three teams have a combined record of 9-15 with East Carolina having the best record out of the three at 4-4. That is not going to help boost Cincinnati’s resume at all. They are going to need those style points because they are not going to get the benefit of the doubt like some other power five programs would.

With the new AP Poll out, SMU stayed in the top 25 and even Houston joined the party at number twenty. Cincinnati doesn’t have Houston on the schedule for the regular season, but it is likely that they will meet on December 4th for the AAC title. If Houston can get there without another loss, that should help Cincinnati’s case if they can knock off the Cougars to win their conference sitting at 13-0.

This all sounds fine and dandy but keep in mind, that ESPN is already setting in those narratives. After Heather Dinich’s tweet, I was catching myself watching College Football Final and saw this.

It’s funny how style points apply to a team like Cincinnati, yet there was no mention of Oklahoma struggling to beat Kansas the week before or the fact that the Bearcats beat Tulane on the road by nineteen while the Sooners only beat them by five at home.

If Cincinnati keeps winning that’s all that should matter. However, when the College Football Playoff Committee gets involved, that’s not always the case. We are going to find out just how highly the selection committee thinks of Cincinnati, but it appears that the groundwork is already being dug by none other than ESPN to try and figure a way to leave them out of the top four.

TCU Players, Past and Present, React to Gary Patterson Leaving as Head Coach
Odds Released on Where Spencer Rattler Will Play in 2022
To Top