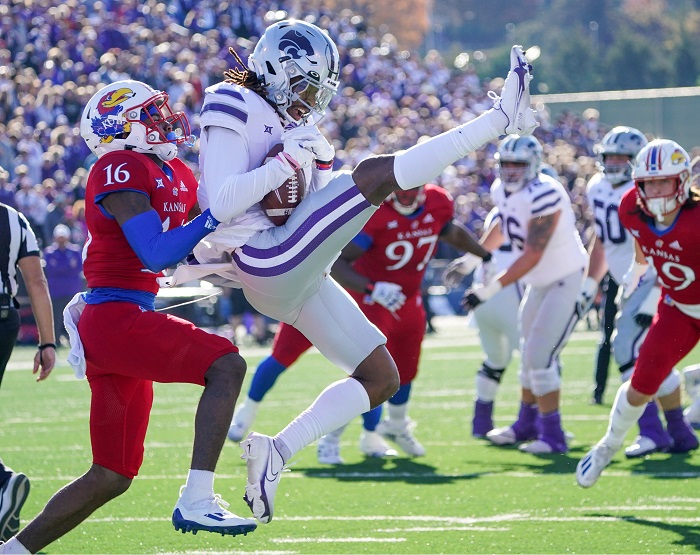 With the victory, Kansas State improved to 6-3 on the season and 3-3 in Big 12 action. It also marked the Wildcats’ third-straight win in the Big 12 after an 0-3 start. For the Jayhawks, they fell to 1-8 overall and 0-6 in Big 12 action. The Jayhawks have not won a game since their season opener against South Dakota. Kansas State now has 13 straight wins over Kansas in football.

Deuce Vaughn has had some big days for the Kansas State Wildcats. But Saturday he got loose in a career-high kind of way.

By early in the fourth quarter, Vaughn, the sophomore spark plug of the Wildcat offense, had already set career highs in rushing yards, yards from scrimmage and rushing touchdowns. He ended the game with 162 rushing yards, 60 receiving yards, 222 yards from scrimmage and three rushing touchdowns. And he got an early break as the Wildcats had a comfortable lead by the fourth quarter. Plus, his 80-yard touchdown run was a career high.

Much has been made of life without quarterback Skylar Thompson when he’s hurt, and justifiably so. But imagine like without Vaughn for just a minute? Ok, now come out of your fetal position, Wildcats fans.

That’s how much Vaughn means to Kansas State.

Kansas had some injury issues at quarterback, which was a shame because, at least early in the game, the Jayhawks were finding ways to move the ball. But, starting quarterback Jason Bean took a hit in the first half that seemed to snap his head back on the turf, which led to him briefly leaving the game. Miles Kendrick came in, but he only lasted three plays before he suffered what appeared to be an ankle injury while throwing a pass on the run. Bean returned after that, but he didn’t last much longer, as he took another hit that took him out of the game for good. That led to Jalon Daniels coming into the game.

Daniels saw action in his third game of the season and led the Jayhawks to their only touchdown drive of the game, as he threw a fourth-down touchdown pass to Kwamie Lassiter II. Daniels finished with an efficient afternoon, going 13-for-19 passing for 105 yards and a touchdown.

But, it ALSO means that head coach Lance Leipold must be mindful of Daniels’ playing time in the remaining three games. As Jesse Newell of the Kansas City Star pointed out during the game, the plan was to redshirt Daniels. The Jayhawks still can, even if Daniels has to play another game. The NCAA allows for a player to be redshirted if they’ve played four games or fewer in a season.

But, depending upon the injuries to Bean and Kendrick, Leipold may be forced into using Daniels more down the stretch.

Welcome Back to Bowl Season, K-State

With the victory on Saturday, the Wildcats are bowl-eligible and should be heading to a bowl game in December after a one-year absence. Kansas State’s last bowl appearance was in 2019 at the Liberty Bowl.

At the time of K-State’s victory, it became the Big 12’s fourth bowl-eligible team (Iowa State has the chance to become the fifth if it defeats Texas on Saturday night).

Bowl games are a nice bonus for a winning season, and Kansas State has the opportunity to reach as high as nine wins, if it can defeat West Virginia, Baylor and Texas in its final three games. Kansas State’s fan base, which carries a great reputation for traveling to Wildcat bowl games, should make the team high in demand. Plus, head coach Chris Klieman will probably appreciate the extra 15 practices that come with the bowl game, something the Wildcats didn’t get a year ago.

Kansas a No. 1 Seed in NCAA Tournament Projection
Watch: Kansas Linebacker Gavin Potter With an All-Time Flop
To Top