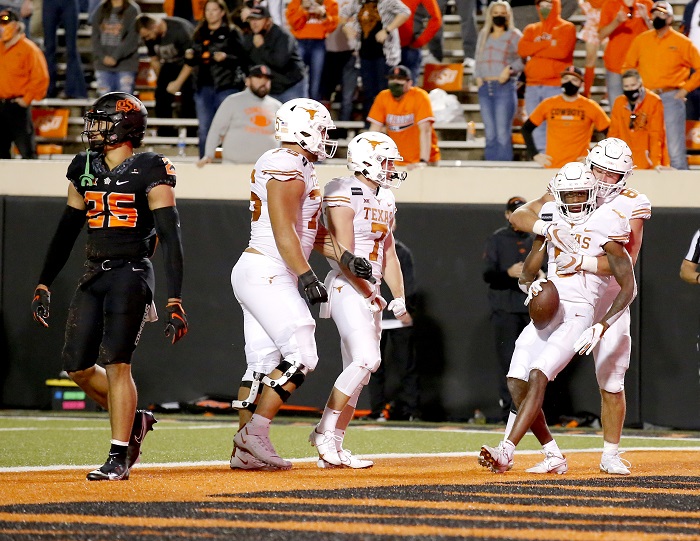 During his Monday news conference, Texas head coach Steve Sarkisian announced that wide receiver Joshua Moore has entered the transfer portal and is no longer with the team.

According to several reports, Moore had a heated exchange with Texas coaching staff during practice last week. Moore, a junior, even cleaned out his locker but was settled down by his teammates and ultimately rejoined the team.

Moore did not start against Iowa State last week and was held out the entire first quarter. His 24-yard reception in the second quarter was the largest play from scrimmage for Texas. That play extended a drive that led to the Longhorns’ only points during their 30-7 drudging in Ames on Saturday night.

Moore ranks third in receptions for Texas on the season behind freshman-phenom Xavier Worthy and sophomore Jordan Whittington, who suffered a broken clavicle in the fourth quarter of the Red River Showdown. After Whittington went down, Moore became a reliable target for the Longhorns.

With Moore’s departure there are questions surrounding who will line up opposite of Worthy. There is plenty of talent on the roster, but experience is hard to come by right now. True freshman Casey Cain is listed behind Moore on the depth chart but has yet to record a catch in 2021.

Texas should have a chance to get some things ironed out this week with Kansas on the schedule. However, Texas cannot afford to take anything for granted, given the turmoil surrounding this team right now. The Longhorns need to win two of their last the three games to become bowl eligible. Texas takes on Kansas this weekend.