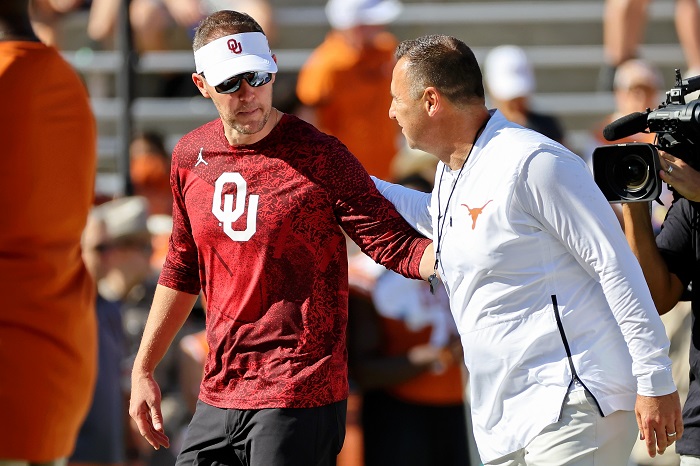 I want to thank each one of you who submitted a question this week and for those reading, I am glad you could join me. I am doing this on a Monday night and of course it would not be a proper mailbag without a drink next to me. Tonight’s drink is a Russell’s Reserve 10. Cheers!

@DwainR11 asks: Can we officially make the call that Lincoln Riley is QBU? Who would be your second choice for QBU in the Big 12?

Duke: You mentioned Steve Sarkisian but I took it off due to the fact that Texas is not QBU. That title belongs to Oklahoma and Lincoln Riley hands down. In fact, it’s not even close. As for who would be second, it depends on your time frame. Baylor and Texas Tech could be in that discussion as they have had some good quarterbacks over the years, but I would go with Oklahoma State. Mike Gundy has had some good ones in Stillwater with Zac Robinson, Brandon Weeden and Mason Rudolph.

@3C4ISU asks: Is Steve Sarkisian on the hot seat if Texas goes 5-7?

Duke: If this was year three of the Steve Sarkisian era, he would have been canned after the Iowa State game. Luckily for him, it’s year one and people will have a little patience. By no means are boosters happy with what is going on with the football program down in Austin, but the man hasn’t even had a full season yet. Texas people need to breath and stop acting like this program is something that it is not right now. It’s not 2005 or 2009 anymore. This football program has been bad for over ten years now and one coach is not going to come in and sprinkle fairy dust over the football program and get everything fixed in year one. I know this will be hard for some people to understand but give it some time. Even Charlie Strong got three years before being fired so why wouldn’t Steve Sarkisian?

@c_wallace_m asks: Is Texas Back?

@jeffstraight76 asks: In the newly configured Big 12 do you think there will be a new Oklahoma? Meaning will one team continuously win the title, or do you see multiple teams doing it? My money is on Oklahoma State as long as Gundy is there

Duke: Oklahoma is currently chasing their seventh straight Big 12 title. When they leave, I do not see another team having a run like that or even close to one. Maybe a team like Oklahoma State wins two in a row but I do believe we are going to see multiple Big 12 football champions over the next ten years. Oklahoma State is a strong program with Mike Gundy at the helm and could be a favorite to win the new look Big 12 in year one. BYU should be a good program along with Iowa State and Matt Campbell. TCU should be strong depending on the hire along with Baylor and Kansas State. Heck, maybe even West Virginia too. All this should make for some exciting football over the next few years, and I am looking forward to it.

@KyleGAdema asks: What’s the best-case scenario for the conference in the Big 12 Championship game? Everything from TV to tickets sold to buzz. How about worst-case scenario (within reason)?

Duke: Some people may hate this answer but the best case for the Big 12 is for Oklahoma and Texas to meet up for a conference title. Forget about the golden hat because a conference championship would raise the stakes even more. If you asked this question to Bob Bowlsby, he would give you the same answer if he answered truthfully. As far as the worst case I would say maybe a team like Kansas and TCU. It’s no knock against TCU but they have one of the smallest fan bases in the conference and Kansas is just well, Kansas. They would much rather make a final four than a Big 12 football title appearance.

@brandongroepper asks: Can we get a Power Ranking on the Big 12 running backs?

Duke: I’ll give you my top six right now

@RPTexan asks: When new head coaches are hired people look for someone with ties to school and area/state. I’m thrilled with Joey McGuire at Tech, but does a head coach really need ‘ties’? Matt Rhule didn’t, neither did Dave Aranda or Jimbo Fisher. Is it more important for the head coach to have ties, or be smart enough to hire a staff that does?

Duke: This is a great question and my answer to that is simple: A great head coach is a great head coach. They just don’t forget how to coach just because a change of scenery. However, it does help when a coach with no ties to the area brings in guys who do. But that also depends on what state you are in. For instance, a coach in Wyoming isn’t going to be filling his roster with a bunch of local players, but it would be key to focus on states such as California, Arizona, and Texas. So, if a coach gets hired in the state of Texas and he is an outsider (like a Matt Rhule), it would be wise to get some coaches on staff who do have ties in the Lone Star State due to the deep talent pool.

How the 2022 NCAA Tournament Bracket Will Look, Without the Regular Season
Five Thoughts on Tuesday Night’s College Football Playoff Rankings
To Top