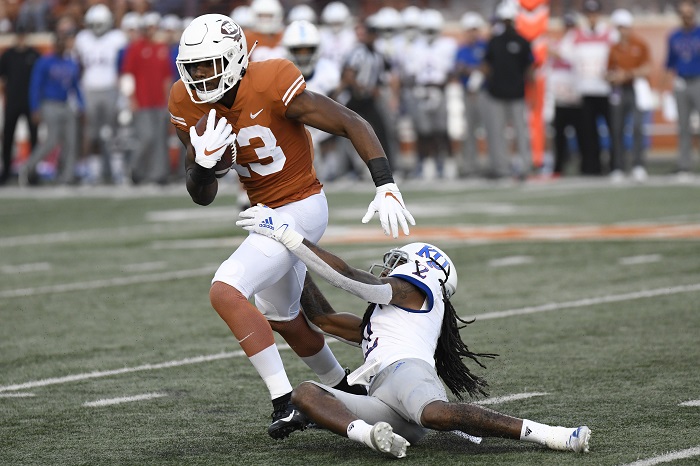 Here is everything you need to know about the upcoming Big 12 match up in our Texas vs. Kansas preview and prediction.

Fun Fact: Texas leads the all-time series 16-3 vs. Kansas and the Jayhawks have never won a game in Austin.

True freshman running back Devin Neal is leading the team in rushing through nine games this season. Neal has started each of the past six games and has a pair of 100-yard efforts against Duke and Oklahoma. He is averaging 4.2 yards per carry and had 62 yards last time out against Kansas State.

The junior safety is one of only two players in the country with 70+ tackles, at least six passes defended and multiple forced fumbles. The junior safety leads Kansas with 73 tackles, five pass breakups, one interception and two forced fumbles. Logan is averaging 5.6 solo tackles per game, which ranks top in the Big 12 Conference and 13th nationally. He is also a special team stud and ranks 18th nationally and third in the Big 12 in kickoff returns at 26.0 yards per return.

Bijan Robinson is one of the most explosive players in college football as he’s piled up 1,057 yards on 181 carries (5.8 ypc) and 11 touchdowns to go along with 23 receptions for 247 yards and three more scores. After passing the 1,000-yard mark this past weekend against Iowa State, he became the 13th Texas player to eclipse that mark. Robinson is currently second in the Big 12 Conference rushing yards (1,057), rushing yards per game (117.4) and all-purpose yards (144.89), third in rushing touchdowns (11) and total touchdowns (14) and fourth in yards per carry (5.84), scoring (9.3
points per game) and total points scored (84). His marks in total touchdowns, rushing yards, rushing yards per game and all-purpose yards all rank in the top-10 nationally.

Overshown is having an outstanding season and has been named a Butkus Award semifinalist after racking up 65 tackles (33 solo) with 5.0 tackles for loss and 1.5 sacks. He’s top 5 in the Big 12 Conference in total tackles and has been very consistent for a unit that has had its ups and downs so far this season.

Kansas needs to find some success in the running game. They’re going up against a Texas team that is giving up over 203 rushing yards per game, which is 9th in the Big 12, ahead of only… Kansas. If they can find some early success with an offensive line that has actually started playing much better in general, giving up just four sacks in their last seven games, and ranking second in the Big 12 in sacks allowed, that will allow them to control the clock, and really start getting a Texas team that is already reeling on its heels.

Texas just needs to get back on track and snap a four-game losing streak, it’s first in 11 years. They’re over four-touchdown favorites in this game. There isn’t “one thing” that Texas needs to do in this game except for actually playing a complete game to the best of their abilities and getting out of DKR with a convincing victory that allows Steve Sarkisian to slowly and steadily get this program back on track.

I’m not predicting any wild upsets here. Texas desperately needs this one and is so much more talented than KU it should be able to roll to a victory. There’s no reason for UT to be overlooking anyone at this point having lost four in a row. Texas will get itself back on track on Saturday night in Austin and snap its four-game slide.