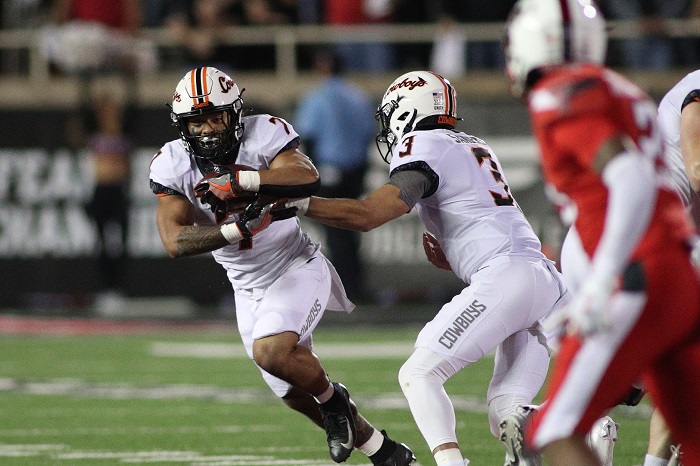 The Oklahoma State Cowboys defeated the Texas Tech Red Raiders, 23-0, to keep them on track to a huge Bedlam game with Oklahoma next weekend.

The Cowboys (10-1, 7-1) remain in a first-place tie with the Sooners (10-1, 7-1), who beat Iowa State on Saturday. The Cowboys also clinched their spot in the Big 12 Championship game. No matter what happens next week, the Cowboys are headed to Arlington, Texas, for the first time since the Big 12 reinstated the title game.

The Cowboys grinded this one out against Texas Tech (6-5, 3-5). The OSU offense had some chemistry issues, especially in the first half. Cowboys head coach Mike Gundy kept the ball on the ground quite a bit, and while it was conservative by Gundy’s standards, it worked. Oklahoma State rushed for 188 yards and the Cowboys put together their first shutout in nearly a decade. The Cowboys’ defense was incredible. And we’ll get to that.

Texas Tech struggled to get anything done on offense. It was a lost night. The Red Raider defense did what it could, but eventually any unit breaks when it’s left on the field for too long.

Oklahoma State defensive coordinator Jim Knowles has helped head coach Mike Gundy build a monster defense in Stillwater. In fact, I would surmise that the unit has exceeded Gundy’s expectations when he hired Knowles before the 2018 season. Gundy probably wanted a defense good enough to complement his Air Raid offense. Knowles has built a defense that sometimes makes you forget Oklahoma State HAS an offense.

The Frank Broyles Award is given to the top assistant coach in college football. It’s typically given to an offensive or defensive coordinator. An Oklahoma State assistant coach has never won the award. Knowles is going to change that next month. Saturday night’s win over Texas Tech was his audition tape.

The Red Raiders were averaging 441 yards in total offense per game entering the game against Oklahoma State. Just, unbelievable.

The Red Raiders started Donovan Smith at quarterback. Red Raiders head coach Sonny Cumbie replaced Smith in the third quarter with highly-touted recruit Behren Morton. Cumbie toggled back to Smith. None of it mattered. The Cowboys smothered the Red Raiders with compete cold-bloodedness.

I don’t want to give you the idea that it’s all Knowles. This Cowboys defense is immensely talented. But the Cowboys have had talent there before. But no Cowboys defensive coordinator has put the ingredients together like Knowles. He’s taken this defense and elevated it into the best unit in the country. That’s the stats AND the eye test.

If Knowles doesn’t win the Broyles Award, then something is wrong. Very wrong.

Let’s Not Draw Conclusions About Tech After This Game

A whole lot went wrong for Texas Tech in this one. Much of it was on offense (I mean, you read the first thought right?). The Red Raider defense, to me, played well for the first three quarters. But with the Red Raider offense unable to sustain anything, the defense was on the field for almost 37 minutes. Any defensive unit will buckle in that situation.

For the past few weeks, new Red Raiders head coach Joey McGuire, I’m sure, has been evaluating this staff, as well as recruiting. I’m interested to see which coaches he keeps and which coaches he let’s go.

It will be more difficult, for instance, with interim head coach Sonny Cumbie, who has an additional year on his contract and is well-respected by the administration and by the fan base. Cumbie has reportedly made it clear he wants to stay. McGuire would be wise to keep running backs coach DeAndre Smith. He’s done solid work with the Red Raiders’ backs, and he’s the father of quarterback Donovan Smith. Given the younger Smith’s raw materials, he could be the starter in 2022. McGuire also wants to focus on recruiting Texas high school players, and ostensibly this staff has built up those relationships the past three seasons.

A loss like Saturday’s might cause some overreaction. Resist that temptation. It’s one loss to one of the best teams in the country.

The Cowboys Are Movin’ On Up

Before the game, the Cowboys probably noticed that No. 4 Ohio State had done the Cowboys a bit of a favor by whipping No. 7 Michigan State like a five-year old swings around a sock monkey, 56-7. I mean, seriously? What happened there?

While the Cowboys were playing Texas Tech, No. 23 Utah did the Cowboys an ENORMOUS favor and beat No. 3 Oregon.

So what happens now? Well, first Michigan State and Oregon, thanks for playing. Enjoy the Rose Bowl (probably). With two losses, the Spartans and the Ducks are done when it comes to the Playoff. If the College Football Playoff committee has any self-respect, the Oklahoma State Cowboys should move up to at least No. 7 on Tuesday.

Next is Bedlam, and this has the potential to be a Bedlam for the ages. The Cowboys haven’t won that game since 2014. But, then again, the Cowboys haven’t had a defense like this, either. The Cowboys have no margin for error, of course. They must beat the Sooners. The Fox crew, Tim Brando and Spencer Tillman made reference to the fact that Gundy said that “Until we beat Oklahoma …”

He knows it. We ALL know it. And there are more pieces on the board to be moved. Either Michigan or Ohio State will lose next week. Either Georgia or Alabama will lose a game. Cincinnati must win its final two games.

We know this about the committee — they LOVE Oklahoma State’s defense. Committee chair Gary Barta can’t stop talking about it. They’re paying attention to those style points. A 12-1 Cowboys team COULD make the Playoff. I’m convinced of that. But they can’t make it if they’re not 12-1. And the only way to get there is to vanquish Oklahoma.