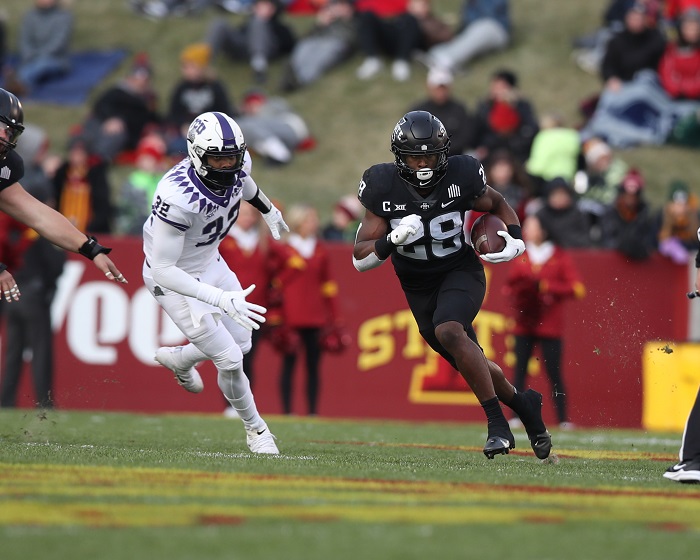 TCU traveled to Iowa State for each teams’ regular-season finale and a chance for the Horned Frogs to get to a bowl game. Iowa State needed a win to secure its fifth-straight season with seven or more wins, which would be a first for the program. It was an emotional day in Ames, with senior day festivities taking place before kickoff and Cyclone Nation celebrating its most successful senior class in program history. The Cyclones capitalized on that emotion and dominated from start to finish. Here are three thoughts on the 48-14 win for the Cyclones on Black Friday.

TCU Defense Has No Answer… Again

Breece Hall had the best game of his entire career tonight, recording 18 carries for 242 yards and three touchdowns, adding a 22-yard touchdown reception in the third quarter. Brock Purdy went 21-30 for 262 yards and two scores. It didn’t matter what TCU did defensively, they had no answer for anything that Iowa State threw (or ran) at them. The ‘Clones had five drives in the second half and all of them ended in touchdowns. Horned Frog fans have watched several years of stifling defense under Gary Patterson, but this season was entirely different. Hopefully Sonny Dykes can find a way to bring the tenacity back on defense for the Frogs in 2022.

Cyclones Efficiency Was the Difference

TCU had matched Iowa State in first downs and yardage going into the fourth quarter, but the scoreboard suggested otherwise. The Horned Frogs actually had the advantage in time of possession but were just unable to capitalize on its opportunities early and the game got away from them. When they were on offense, the Horned Frogs had several big plays but most of them resulted in zero points. You can’t do that if you expect to pull off the upset and to make matters worse, TCU had two drives end in turnover on downs, both on failed 4th-and-1 attempts. Max Duggan also threw a bad interception in the endzone that should’ve been another score for TCU. TCU only averaged 3.9 yards per attempt on the ground, which made them one-dimensional almost all night. Conversely, Iowa State’s rushing attack, which averaged 14.5 per attempt, was unstoppable tonight, adding to the pile of bad outings for the TCU rushing defense.

Breece Hall had the best game of his entire career tonight, recording 18 carries for 242 yards and three touchdowns, adding a 22-yard touchdown reception in the third quarter. Hall’s first score will be the one that is remembered from tonight, not only by him but everyone in attendance on Friday night. With 3:44 left in the second quarter, Hall found a seam in the defense and went 39 yards for his first score of the football game. His emotions got the best of him as he knelt in the endzone, aware of the history that he had just made on his home field. Hall extended his streak of games with a rushing touchdown to 24; surpassing and claiming the FBS record set by Bill Burnett (Arkansas) during the 1968-70 seasons. As his team surrounded him, in what could be the junior’s last home game, the crowd in Ames congratulated their star running back in an unforgettable moment. As he approached the sidelines, his coach Matt Campbell, lifted him into the air with a hug, congratulating the Cyclones’ all-time rushing leader. That moment encapsulates the passion and joy that college football is played with, and I feel lucky to have watched it.

Sonny Dykes will be Next Head Coach at TCU: Report
AP Top 25: Oklahoma State Rises To No. 5 After Bedlam Win
To Top