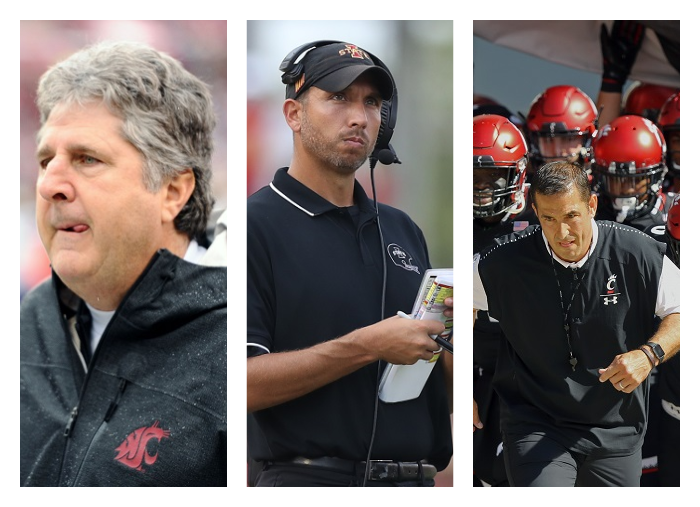 Lincoln Riley is off to USC, so now the Oklahoma Sooners have to find a new head coach. That’s athletic director Joe Castiglione’s job right now.

Every AD has a ‘if my coach leaves’ file, so don’t expect Castiglione to start from scratch. Based on recent experience, don’t expect Castiglione to take long. It took him less than a week to settle on Porter Moser to replace Lon Kruger as men’s basketball coach. It took him less than to two to hire Michelle Baranczyk to replace Sherri Coale as women’s basketball coach.

Heartland College Sports has already written a piece on the reasons to re-hire former Sooners head coach Bob Stoops. Should the Sooners opt not to do that, or Stoops decide he does not want the job, here are five potential replacements.

I’d expect Oklahoma to take a swing at Campbell. That doesn’t mean Campbell is going to swing. It just means that Castiglione knows how well-respected Campbell is, both within the conference and outside the conference. The players and fan base in Ames love him. And Campbell loves them. It would be a hard get. But Castiglione can offer two things the Cyclones likely cannot — more money (perhaps $1-2 million more) and the chance to coach in the SEC in a few years. Campbell would have everything he wants in Norman. But what does HE want? Campbell has turned down quality jobs before.

The Group of 5 Target

The Bearcats are set to join the Big 12 in a couple of years. But this is a whole different thing now. The Oklahoma opening gives Fickell access to one of the premier jobs in the country and, eventually, a seat at the table in the SEC. Fickell has already shown he can build a program. He’s also shown that he can take the capital from Cincinnati’s magical two seasons and spin it into higher-level recruits. He’s sitting on a commitment from an Elite 11 quarterback right now. He’s even run a Power 5 program, albeit for a year and on rushed terms at Ohio State. One note — Fickell has never coached outside of the state of Ohio and he’s a Columbus native. Ohio may simply be where he wants to be.

Yes, Traylor just landed a fat extension with the Roadrunners, whom he just led to an 11-1 season. And, yes, that extension comes with a significant buyout of $7 million. Oklahoma is one of the few programs that can simply write a check for a buyout like that without much concern. I mean, theoretically, they’re going to get some buy-out money from Riley’s departure, right? The Sooners not only need a quality coach but they need a quality recruiter, especially in Texas, where the Sooners have done a great job plucking talent for years. Traylor has excellent recruiting ties in the state (which is why many believed Texas Tech would be interested in him). He’s shown he has the coaching chops, too.

Boy, wouldn’t this be something — the Pirate back in the Big 12 (albeit briefly) with the program that helped pave his way to his first head-coaching job at Texas Tech. Leach served just one season as Bob Stoops’ offensive coordinator, in 1999, but it was more than enough to push him over the top for the Texas Tech job. Leach turned a Sooners offense that had been No. 11 in the Big 12 the previous season and made it No. 1. He coaches the type of offense that offensive players love and he’s done quality work in two seasons at Mississippi State. The only question is whether he’s done job hopping? By the way, he’s only 60.

The ‘Under The Radar’ Coaching Tree Hire

If you haven’t been paying attention, Norvell has turned Nevada into a quality Group of 5 program, winning seven or more games each of the last four seasons. Norvell spent seven years on Stoops’ staff as a wide receivers coach and a co-offensive coordinator. His Wolf Pack have put up some of the best offensive numbers in FBS the past two seasons. He knows the terrain in Norman. It’s a big step up from Reno to Norman. But he could be the Stoops coaching tree guy to watch.