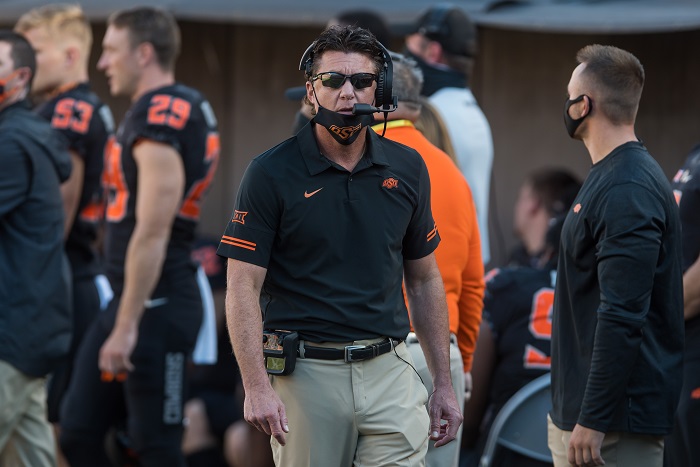 The coaching carousel of 2021 has been unmatched in both volumes of jobs, and names on the move. Lincoln Riley, gone to USC. Brian Kelly, gone to LSU. Dabo Swinney, gone to Oklahoma. Just kidding on that last one, but would you really be that surprised?

Something that escapes the minds of fans is that, if those names are moving, who else is peeking around the nation for a new landing spot? It’s not like there is a surplus of Oklahoma’s, USC’s, Notre Dame’s, Florida’s, or LSU’s out there. Those are destination coaching jobs, and there are only so many candidates to fill them.

One candidate for a job of that stature could be Mike Gundy, or could’ve been, according to Sports Illustrated’s Pat Forde. In a story released today, titled, “‘The Schools Clearly Aren’t in Control’: Inside College Football’s Wild Week,” Forde talked about Gundy showing interest in the Florida job before Napier was ultimately hired:

“When Florida’s job opened, its officials were alerted that Riley and Kelly were willing to move, sources tell SI. The Gators were already set on their No. 1 target and the coach they eventually hired, Napier. During the final week of the regular season as Oklahoma State was preparing to play Bedlam, at least one AD received an email from a marketing agent representing Mike Gundy, saying he was interested in the job.“

If Gundy was interested in the Florida job, would he take another one that is out there or could be soon? The Oklahoma job is off the table, that is slanderous to even think about. But what if Miami comes open? What if Dabo does take the Oklahoma job? Would Gundy consider Clemson? He will certainly be a hot candidate if he wins the Big 12 and gets the Cowboys into the Playoffs.

It’s all speculation at this point, and in my opinion, Mike Gundy isn’t going anywhere. He has built Oklahoma State from the ground up, as Bob Stoops did at Oklahoma. Gundy loves the program and seems to be a lifer in Stillwater, but in the coaching carousel of 2021, it’s not all smoke and mirrors.