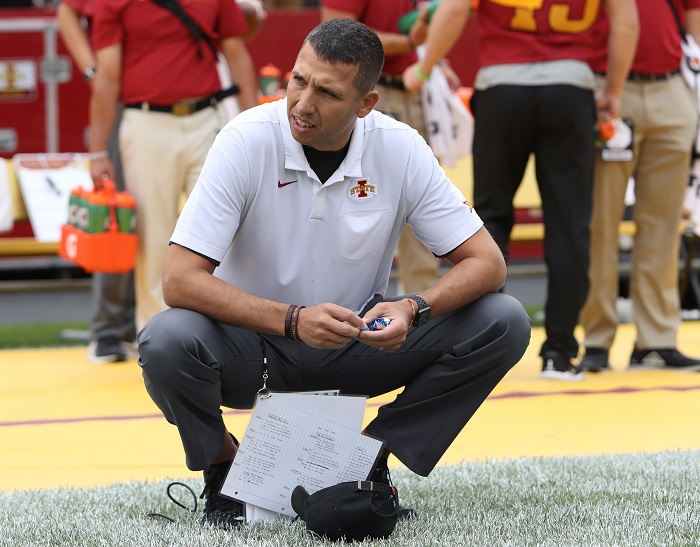 Oklahoma. Notre Dame. LSU. USC. Florida. Miami. Oregon. This isn’t just a list of some of the top teams in college football, it is a list of vacancies that the 2021 Coaching Carousel has seen come and go. Those are monumental programs across the landscape, and no one could have predicted this level of turnover in the sport in one season.

The only job that is currently open now is the Oregon job, which is vacant because Mario Cristobal has taken the job in Miami. You can’t blame the guy, it’s cold and rainy all year in Eugene, Oregon. Cold is hardly in the vocabulary in South Beach.

Well, when programs like that open up, you’re going to see some up-and-coming names start to move around, and two guys from the Big 12 fit the criteria. Matt Campbell and Dave Aranda both received odds to become Oregon’s next head coach.

Here is the full list of odds (Big 12 Coaches in Bold), courtesy of SportsLine.com:

Campbell and Aranda are not exactly favorites to land the job, but they are two of the hottest names in the sport and sometimes money talks (something that Oregon has in truckloads).

The favorite, Chip Kelly, would be quite the reunion since he is mostly responsible for the success that the ducks are riding into the 2020s.

If I had to put money on this vacancy, I would take Justin Wilcox at +500. Wilcox was born in Eugene and played defensive back for the Ducks while his brother and father also played for Oregon. Wilcox isn’t far down the road at Cal and though he has struggled there, his resources are limited and would multiply greatly in Eugene. My money is on Wilcox taking the job and opening up yet another coaching vacancy (Cal).