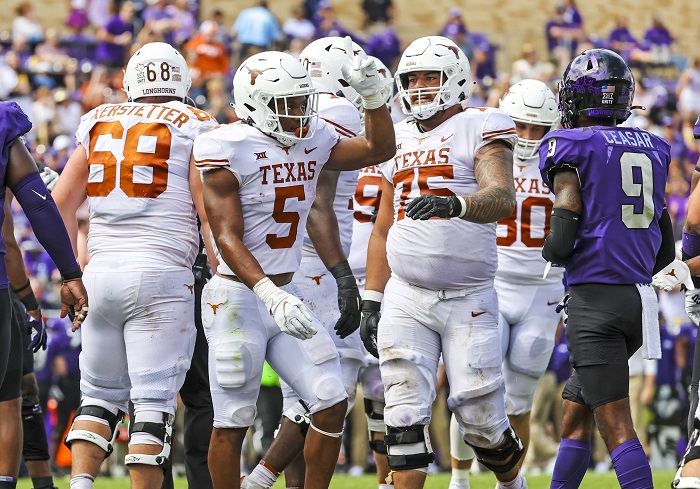 The Texas Longhorns (5-7, 3-6 Big 12) were picked to finish 3rd in the 2021 Big 12 Media Preseason Poll. The Longhorns were also ranked 21st in the AP Preseason Poll and 19th in the AFCA Preseason Coaches’ Poll.

While I thought the Longhorns could potentially compete for a Big 12 title, I had numerous reservations due to the coaching and system changes, not to mention that replacing a guy like Sam Ehlinger at quarterback is never easy and plenty of other gaps needed to be filled on both sides of the ball. Another concern I had for the Longhorns entering 2021 is that the program seems to have a deeply rooted culture problem that transcends coaching changes.

Clearly, Texas did not live up to media expectations or the AP and AFCA preseason rankings. After a strong start to the season, with a hiccup at Arkansas, a fourth-quarter meltdown in the Red River Showdown cascaded into a six-game losing streak that didn’t end until Black Friday with a narrow win over K-State that probably should have been a loss.

Losses notwithstanding, to say Texas had a season worth forgetting would be an understatement. There was the tragedy of Jake Ehlinger’s death, more Eyes of Texas drama, Monkeygate, the Bo Davis audio, and the season-ending injury to All-Big 12 running back Bijan Robinson, not to mention all the drama surrounding Texas and Oklahoma’s impending departure for the SEC and how the teams went about arranging it.  While tragedies and injuries are beyond a program’s control, too much of the circus surrounding Texas football in 2021 was self-inflicted in one way or another.

That said, I wouldn’t blame Texas fans for wanting to skip looking back on the 2021 season altogether; however, to see where a program is heading, it is helpful to look at where it has been, and Texas’ 2021 season was not without its better moments.

The Steve Sarkisian era began with an impressive win over one of the darlings of the 2020 season as the Longhorns racked up 435 yards of offense, including 170 yards rushing, and allowed the Ragin’ Cajuns to convert on just four of 13 third-down attempts. Texas also won the turnover battle, 1-0, and held Louisiana to just 2.6 yards per rushing attempt. This was a quality win and Louisiana’s only loss of the season. The Cajuns finished the season at 12-1, won the Sun Belt Championship, and ranked #23 in the final College Football Playoff Poll.

The magnitude of this loss in many ways is all about optics as KU, the perennial cellar dweller of the Big 12, had not won a game since beating FCS South Dakota to open the season and had not won a Big 12 road game since topping Iowa State in Ames way back in 2008. The bad optics weren’t all just about the opponent either. It was Texas’ fifth straight loss, came on the heels of the Monkeygate and Bo Davis audio scandals, and Robinson was lost for the season to injury.

However, what truly makes this loss so bad is that Texas had no business losing to Kansas. While the Jayhawks were an improved team by the time they met Texas, the Longhorns were at home and had decisive advantages in talent and speed all over the field. The game spoke volumes about the intestinal fortitude of the Jayhawks and the Longhorns.

THE ONE THAT GOT AWAY

Texas jumped out to a 28-7 lead in the first quarter and carried a 38-20 lead into halftime. The Horns were still up by 11 at the start of the fourth quarter but then were outscored 25-7. During Texas’ fourth-quarter meltdown, Oklahoma RB Kennedy Brooks exploded for 135 yards and two touchdowns on just six carries and finished the day with 217 yards on 25 carries.

Texas QB Casey Thompson threw for 388 yards and five touchdowns with no interceptions and Robinson added another TD and 137 yards on 20 carries, but the offensive fireworks were not enough to overcome Texas’ poor second-half defensive performance. The Sooners finished with 662 yards of total offense and 339 rushing yards.

MY PICK FOR TEXAS’ OFFENSIVE MVP

Despite missing the last two games of the season, Robinson rushed for 1,127 yards and 11 touchdowns on 195 carries and added another 295 yards and four touchdowns on 26 receptions. Robinson was the undisputed star of the Longhorns this past season and received First Team All-Big 12 honors for his efforts.

Robinson’s best game of the season was the 32-27 win at TCU. He rushed for 216 yards and two touchdowns on 35 carries against the Horned Frogs and added 22 yards on two receptions.

Texas recently received good news from Robinson as he announced that he plans to stick around in Austin for at least one more season. He will be an early Heisman Trophy candidate in the 2022 season, and he gives the Longhorn faithful a reason to hope for a big bounce back in Sarkisian’s second season as head coach.

MY PICK FOR TEXAS’ DEFENSIVE MVP

Overshown led the Longhorns in tackles in 2021 with 74 (38 solo). He also had two sacks and two fumble recovers. His best game of the season came in the 38-18 win over Louisiana when he had 13 tackles to go along with half a sack. His performance in the 32-27 win at TCU was also critical as he racked up 8 solo tackles, 10 total, and recovered a fumble.

Overshown’s “hidden” numbers include nine QB hurries, a pass broken up, and a success rate of just under 80% on his attempted tackles as he only missed 18 on the season.

Texas currently has the best recruiting class of the 2022 cycle in the Big 12, ahead of Oklahoma, according to 247 Sports. The class, which features 21 commitments and 15 four-star players, is also currently ranked 6th nationally after adding five-star OT Kelvin Banks of Humble, TX, and beating out Texas Tech for the services of QB Quinn Ewers five-star Ohio State transfer.

As of this writing, Texas is still in the hunt for two more five-star recruits: LB Harold Perkins of Cypress, TX, and CB Denver Harris of Houston.

Texas will open the season with a nearly surefire win against the Warhawks. However, the schedule heats up quickly afterward.

The Crimson Tide comes to Austin for what is sure to be one of the highest-profile games of the early season. There’s a good chance ESPN’s Gameday will be in town for this one as Sarkisian matches up against his former boss, the legendary Nick Saban. Never say never, but I don’t like Texas’ chances of knocking off Alabama. However, it is a huge opportunity for the Longhorns, and a win would make the sky bluer, the sun brighter, and the taste of ice cream sweeter in Longhorn country for days if not months to come.

The Roadrunners will get a shot at the Horns in Week 3. It’s a very dangerous game for Texas. Not only are the Roadrunners good, but coming off a big game against Alabama, the game has the look of a trap.

It’s difficult to say what the Red Raiders will look like in 2022; however, playing in Lubbock has been tricky at times for Texas, and the Longhorns can count on getting the Red Raiders’ best shot.

The Mountaineers will likely lose a lot on both sides of the ball this offseason, and though they have a strong recruiting class coming in, it remains to be seen if they’ll be able to fill some big shoes in the offensive backfield and along the defensive line. However, the week before Red River is a difficult spot for the Horns, and West Virginia isn’t going to be shy about wanting to notch a win in Austin.

The tables will be turned for Sarkisian in Red River this season as this time it will be Brent Venables’ first stab at winning the Golden Cowboy Hat. This is always an unpredictable game, and, depending on how things shake out earlier in the season, Sarkisian’s job might hang in the balance.

The Cyclones are losing a ton of production on both sides of the ball this offseason, and it is anyone’s guess how good ISU will be. However, there seems little doubt that ISU will take a step back next season. You just don’t lose players like Breece Hall and not fall off a bit.

The Cowboys should remain in the upper half of the league next season; however, there’s enough turnover in personnel and the coaching staff to make Oklahoma State a bit of mystery heading into 2022.

Having a bye week to prepare for facing Deuce Vaughn and Felix Anudike-Uzomah in Manhattan is a good thing. As of this writing, it is unclear who will play quarterback for K-State next season (although rumors about Nebraska QB Adrian Martinez transferring to K-State have circulated a good deal recently), and the Cats have some defensive holes to fill at defensive tackle and in the secondary. Nonetheless, this could be a tough game.

The Horned Frogs are another of the Big 12’s big mysteries heading into the 2022 season. Gary Patterson is out, and Sonny Dykes is in. QB Max Duggan plans to return, but RB Zach Evans has entered the transfer portal. Can Texas make it two in a row against TCU?

The Jayhawks have some nice pieces returning for the 2022 season, and head coach Lance Leipold made strides with the team in 2021. However, KU will still be woefully outmanned by Texas. The Longhorns should be able to avenge their most embarrassing loss of 2021, but they’ll have to come ready to play.

The Bears won the Big 12 in Dave Aranda’s second season as head coach and appear to be primed for another great season in 2022. This is likely to be a tall task for the Longhorns. However, no one can accuse Texas of not having the talent to do it.

The 2021 season was a circus for Texas, and after a nice start, the wheels came off in the first year of the Sarkisian era. The Longhorns have a lot of work to do in the offseason, but there are reasons for hope. The 2022 recruiting class is strong, Robinson is returning, and the Horns may soon add a five-star quarterback to the fold. What 2022 has in store is anyone’s guess, but I doubt it will be as disastrous as 2021 turned out to be.