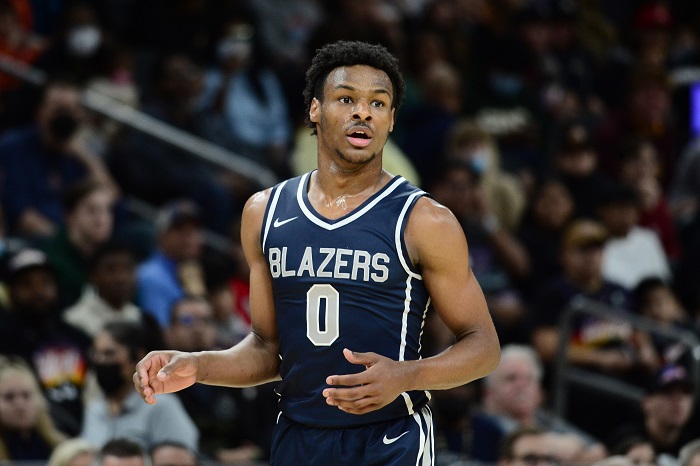 Bronny James, the son of NBA legend LeBron James, may have interest in the Texas Longhorns as a college destination, according to a report in 247Sports.com.

James, who is considered a Top 40 member of the 2023 recruiting class, recently played with Sierra Canyon in the HoopHall West Tournament in Phoenix. During that event, he had 11 points, five rebounds, three steals and two assists in a 65-52 victory over Perry High School. Covering the tournament was 247Sports national basketball director Eric Bossi.

In Bossi’s piece, he noted that James hasn’t released a list of schools that he’s interested in. He also doesn’t note a source for the information. But Texas came up in one paragraph of his story:

‘He’s still basically off limits to the media and hasn’t put out a school list, but some of the teams that he is believed to have interest in include Duke, Ohio State, Tennessee and Texas among others.’

So, if Bossi’s notes are right, the Longhorns at least have James’ attention.

Bossi broke down James’ game against Perry in the piece:

‘Standing about 6-foot-3, James has really started to mature physically and is starting to come into his own as a player. His jump shot looks good, he has deep range, he handles well enough to play some minutes at point and maybe the most pleasant development so far is how he is turning into a big-time defender.’

Texas could use all of those things. Heck, any college team could use those things, along with the obvious image boost that would come from having LeBron James’ son on the roster.

A Sports Illustrated piece noted that Kansas is among the teams listed on James’ recruit page on 247Sports. But since James hasn’t made any public comment, some of this could be guesswork.

James can’t sign with a school for at least a year, and there’s no guarantee he will even go to the college route. His father went straight to the NBA. James could opt to go pro and head to the G League and play for the Ignite team for a year before making himself available for the NBA.

But, at least for now, Chris Beard and the Longhorns can dream a little, right?