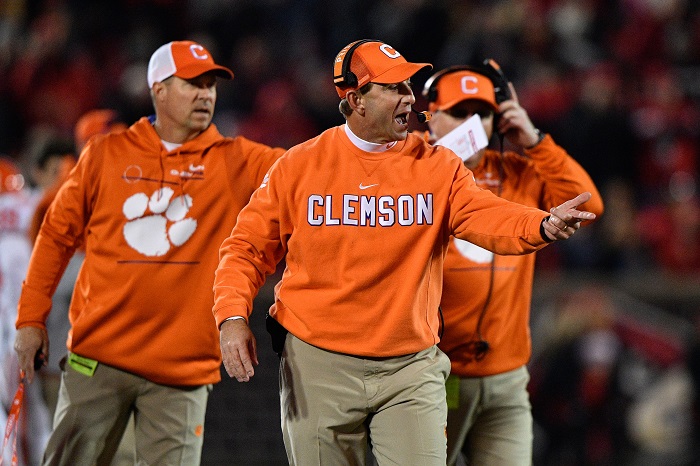 Clemson head coach Dabo Swinney is not happy with how the college football transfer portal is playing out.

The comments by Swinney come shortly after Lane Kiffin compared the transfer portal to free agency across college football.

Swinney took things a step further, saying at Clemson’s signing day on Wednesday, “It’s crazy, it’s really sad to be honest with you. There’s right around 2,000 kids in the portal and most of them don’t have anywhere to go. There’s so much tampering going on and so many adults manipulating young people. It’s sad, but you know, it it what it is from that standpoint. You’ve got a lot of young people that … there’s a time and a place, but most of the kids are in there when they shouldn’t be in there.“

“Some are and some shouldn’t. Some of the lessons we’re teaching young people I don’t think is going to benefit them well as they move through their life. It is something everybody has to manage and deal with. There’s no consequences. There’s no rules. I’m all for transferring. I personally think we should let them go whenever they want. I just think they should sit a year and then you get that year back upon graduation. What we’ve done is decentivize and de-value education and I think that’s the wrong approach.”

And while graduation rates in college football are at an all-time high, the Clemson head coach says it’s going to change, adding, “We’re going to have a lot of young people that aren’t going to graduate. Mental health is one of the biggest issues in college. There’s a lot of kids whose identity is wrapped up in football and all this does is further that. when they get to these other places and they think the grass is greener and they realize the mirror traveled with them, I think a lot of kids are going to suffer. I think graduation rates are going to go down and it’ll be interesting to see where that is five years from now, 10 years from now.”

There’s no doubt that college football is going through a major overhaul with the portal, plus name, image and likeness, and it’s likely we will see some changes in the coming years.

Meantime, Clemson now prepares to take on Iowa State in the Cheez-It Bowl later this month.