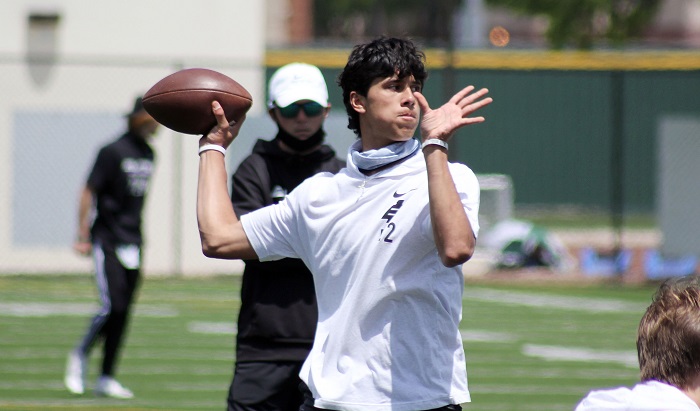 There were plenty of new faces coming into the Big 12 this past week with the early signing period. However, no position is more important than the quarterback position. While it may be tough for quarterbacks to make a difference in their freshman season, some may be forced to play early if it comes down to it. While they may not be ready to play right away some may have to make an impact in 2022. Here are my top four freshmen quarterbacks who could make an immediate impact next season.

If there was a team who was in desperate need of a quarterback, it was the Texas Longhorns. Casey Thompson transferred out and it still appears that Hudson Card isn’t ready to take on the starting job quite yet. Luckily for Texas, they were able to get Quinn Ewers from Ohio State. While Ewers didn’t take a snap last season for the Buckeyes, he was the nation’s top quarterback prospect for the class of 2021 by every major recruiting service. In fact, according to 247Sports he was the highest rated quarterback prospect since Vince Young who was in the 2002 class. That worked out for Texas quite well so I am interested to see if Ewers can make in impact like Vince Young did in Austin.

While West Virginia has had the same starting quarterback for the last two seasons, that doesn’t mean someone else can’t step in. Jarret Doege has been the guy for the Mountaineers since late 2019 and it has been quite a bumpy ride since he took over. Along with Doege is backup Garrett Greene, who has seen a few snaps but has yet to play a full game. With neither quarterback playing at a high level, that leaves the door open for a guy like Nicco Marchiol to come in and potentially play early. Marchiol is a four-star quarterback out of Chandler, Arizona and is a top 300 player in the class of 2022 according to 247Sports. Don’t be shocked to see him in the battle for the starting job before the season.

Much like West Virginia, Oklahoma State has had the same quarterback the last couple of years with Spencer Sanders. While the Cowboys did make their first Big 12 title game appearance this year, they still have had plenty of up and down moments with him as a passer. Sanders isn’t the guy who will throw for 300 yards and pick apart a defense as he is best suited to be more of an athletic game manager. Garret Rangel is capable of being more than just a game manager. I have had the chance to see Garret in person and he can absolutely throw the football well. There is a reason he was rated as a top 25 quarterback in the 2022 class, and I do believe he can make an impact in the quarterback room in Stillwater.

Caleb Williams is still the starter as of now, but there are still some questions out there if he will leave or not. It appears that he may stick around, but with Spencer Rattler transferring to South Carolina, the quarterback room in Norman is a little light. Nick Evers may not be the guy who takes over the starting job but could very well end up being the backup for the 2022 season. As we all know, backups must stay ready because you never know what can happen in the game of football. Plus, what happens if Caleb Williams struggles like he did late in the season? Maybe Nick Evers could see a few snaps next season.