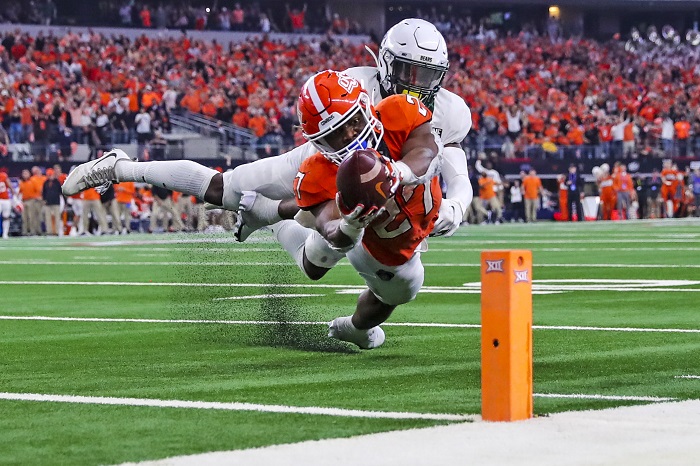 Oklahoma State running back Dezmon Jackson has entered the transfer portal, according to Matt Zenitz of ON3.com. Jackson started for the Cowboys in the Big 12 Championship after Jaylen Warren suffered an ankle injury that kept him from appearing in the game. Jackson managed just 31 yards on 19 carries and his final carry of the game was one of the biggest heartbreakers for Pokes fans ever.

Jackson totaled 686 yards and six touchdowns on 148 carries in three seasons with the Cowboys. He played in six games in 2021, missing the other seven with a leg injury, and carried the ball 48 times for 139 yards and two touchdowns.

Jackson never really lived up to his initial start against Texas Tech in the 2020 season, where he ripped off 235 yards and three touchdowns on 36 carries. The three-star prospect out of Hutchinson Community College looked like the heir apparent after Chuba Hubbard left for the NFL. Now, he will try to be the lead back somewhere other than Stillwater in 2022.

Oklahoma State now has five scholarship running backs that will be eligible to return in 2022, since starter Jaylen Warren will have no eligibility remaining after the Fiesta Bowl. Dominic Richardson, Zach Middleton, Jaden Nixon, and two incoming freshmen, CJ Brown and Ollie Gordon will vie for the starting gig alongside quarterback Spencer Sanders in the backfield.

Oklahoma State faces Notre Dame in the PlayStation Fiesta Bowl on New Year’s Day and hopes it will have Jaylen Warren back for that game. If he can’t go, Jackson has confirmed that he will play in the Fiesta Bowl before transferring.