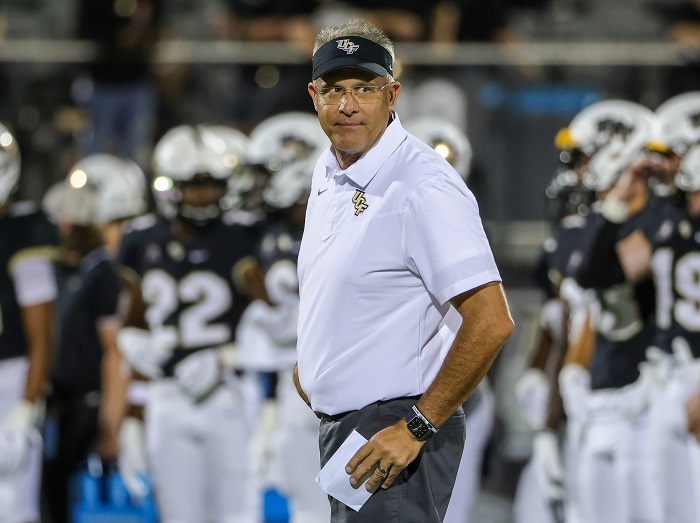 UCF proved itself as the best team in the State of Florida with a 29-17 victory over the Florida Gators in the Gasparilla Bowl Thursday night. The Knights used their rushing attack to propel them to victory with two players racking up over 100 yards each. Isaiah Bowser led the way with 155 yards and two touchdowns on 35 carriers. Ryan O’Keefe carried the ball just four times, but one of his runs went for 74 yards, providing him 110 yards on the day. O’Keefe also added 85 receiving yards on seven receptions, including one for a touchdown. UCF outrushed the Gators 288-205 while Florida doubled the amount of penalties and yardage of UCF. Eight penalties amounted to 85 yards against the Gators while UCF was penalized four times for 42 yards.  UCF outscored Florida 20-7 in the second half as UCF’s defense shut Florida out in the fourth quarter. The Knight offense placed up 17 points in the third quarter, pushing UCF to the victory. After the game, punches were thrown during a brief scuffle. For the most part, cooler heads prevailed preventing a bad scene from getting completely out of hand. With the victory, UCF is 2-0 against in-state FBS opponents. The SEC starts bowl season 0-2 with two SEC East teams falling to two teams considered as Group of Five schools this year. Missouri fell 24-22 in the Armed Forces Bowl to Army, and Independent.

1. Florida WR Justin Shorter is out of the hospital

Near the end of the game, Florida receiver Justin Shorter took a scary hit trying to catch a pass when he was left motionless on the field. While we enjoy watching the SEC having pitfalls, we also recognize these are humans playing on the field and trying their best to perform well. It was a frightening scene and we hope Shorter will be able to continue his playing career at the highest level possible. Most importantly, those of us at Heartland College Sports are happy to see this update and have Shorter in our thoughts and prayers for a rapid, full recovery. Health and safety are always the top priority.

2. Florida showed more fight post-game than it did during the game

After the game, a near-brawl broke out. Thankfully, cooler heads prevailed although some players did swing at others. This scene could have become much uglier, and thankfully it did not.

The fights weren’t just on the field though. Fights in the stands were filmed. There isn’t too much excitement in this video, but it’s clear that Christmas cards won’t be exchanged between these folks. It seems a real rivalry is starting to spruce up between UCF and Florida. And why not? A changing of the guard may have taken place. Florida, historically, is the premier program in the state. Yet, UCF is well on its way to taking that crown as it is set to join the Big 12 Conference.

3. UCF is the State Champion of Florida

With the victory, UCF is 2-0 against FBS teams in the State of Florida. The Gators are now 3-1 having defeated Florida State, Florida Atlantic and South Florida. The Seminoles defeated Miami (FL). The Knights also have the best record of any team in the State of Florida at 9-4. UCF finished third in the American Athletic Conference, just one spot out of the conference championship game. One of the teams who advanced is now in the College Football Playoff. The other is a two-loss Houston team who will play Auburn. The AAC has multiple opportunities to prove itself as the better conference over the SEC. Thus far, they are 1-0. Additionally, Florida hasn’t won a national title in over a decade. UCF won the Colley Matrix National Championship in 2017 after finishing undefeated, including a bowl victory over an Auburn team that defeated Alabama and Georgia during the regular season. The stock of the Gators is falling while the UCF stock is soaring right now. This is a big deal because it provides Gus Malzahn selling points on the recruiting trail.