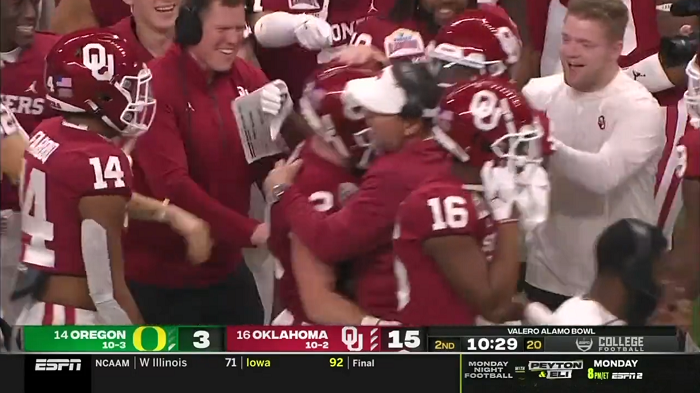 I’ve always believed college football was a better product than the NFL. The passion. The pageantry. The history. The unexpected. It just hits different.

And once again, that was on a display on Wednesday night during the Alamo Bowl where Bob Stoops was back on the sidelines for the Oklahoma Sooners as the interim head coach after Lincoln Riley stunningly left Oklahoma for USC a few weeks ago.

In a special moment, Bob Stoops got to be on the sidelines when his son, Drake, caught a touchdown pass in the game to give Oklahoma a 15-3 lead over Oregon.

And if you don’t feel a little something watching Bob Stoops greet his son as he returns to the sidelines, you’re hopeless.

These are the kinds of moments that make college football what it is. Bob Stoops returning to a place he helped rebuild because the program needed him, coaching guys who mostly don’t know him, but have immense respect for him. Then, getting to watch his son catch a touchdown from the sidelines in what will possibly be his final time ever on the sidelines is the kind of storyline you can’t script.

These are the stories that can be difficult to explain to non-college football fans.

But for those of us who love college football for so many reasons, it’s just the latest example of what makes it the best sport in America. The passion. The pageantry. The history. The unexpected. All of it was wrapped into one in this moment. And sorry, NFL, you can’t duplicate that. No matter how hard Roger Goodell tries.

Watch: Bob Stoops Entering the Alamo Bowl Will Give You Chills
Oklahoma DL Perrion Winfrey Suggests Lincoln Riley Was the ‘Problem’ in 2021
To Top