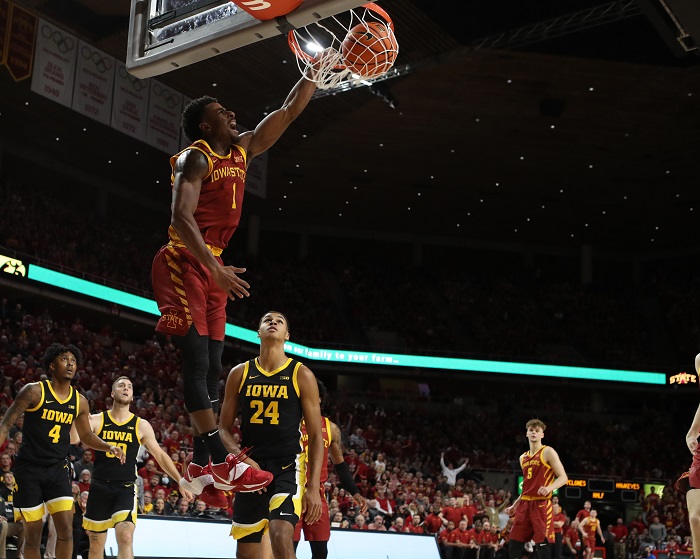 Here is everything you need to know about the Baylor Bears and the Iowa State Cyclones in our Baylor vs. Iowa State Big 12 men’s basketball preview.

G L.J. Cryer: Baylor head coach Scott Drew told anyone who would listen that Cryer, a true freshman last season, was a star in the making. Well, 12 games in and Cryer is the Bears’ leading scorer at 13.6 points per game. He’s the Bears’ leading 3-point shooter with 26 made 3-pointers and a 45.6 percent clip from the arc. The crazy part? Cryer isn’t a full-time starter.

F Kendall Brown: Brown, a true freshman and one of the centerpieces of the 2021 recruiting class for Baylor, is probably the reason Cryer isn’t starting. Drew had no choice but to start Brown, a 6-foot-8 guard/forward, and Brown has delivered. He’s averaging 13 points per game, 3.8 rebounds per game and shooting 71.4 percent from the floor. That’s a big reason why NBA scouts are already giving Brown a look-see.

F Jonathan Tchamwa Tchatchoua: ‘Everyday John’ is still doing the dirty work in Waco, but he’s added scoring to his repertoire. His scoring average has boosted to a career-high nine points per game so far, while he’s leading the Bears in rebounding at 8.4 per game. He still comes off the bench in place of starter Flo Thamba, but Tchatchoua brings the same energy he did a year ago, just with a bit more scoring punch.

G Izaiah Brockington: The Penn State transfer is averaging 16.9 points and 8.4 rebounds per game so far this season. He’s been both a Big 12 Player of the Week and a Big 12 Newcomer of the Week this season, and his six double-doubles lead the Big 12. What is interesting is that Brockington had never had a double-double before arriving at ISU. He’s in the Top 3 in the Big 12 in scoring and rebounding.

The Bears are, of course, the defending national champions. The Bears are also the nation’s No. 1 team in both polls, thanks to their undefeated start. While the Bears’ signature win is its victory over Villanova, the Bears have five wins over Power 5 conference teams, including Michigan State, which is now a Top 10 team. Head coach Scott Drew won his 400th career game earlier this season, and he would seem to have many more to go in Waco. He’s perfected his formula — high-quality recruiting, player development and timely transfers. This season, that timely transfer is guard James Akinjo, who fits what Baylor wants to do like a glove. These Bears aren’t last year’s Bears, but they may be just as good.

The Cyclones are built on defense. This turnaround, engineered by first-year Cyclones head coach T.J. Otzelberger, has the Cyclones allowing 56.1 points per game and holding opponents to 36.9 percent shooting and 24.2 percent shooting from the 3-point line. The Cyclones have held eight opponents to 64 points or less, and no opponent has shot better than 44 percent this season. Otzelberger took over a team that won two games in 2020-21, and the Cyclones have already snapped losing streaks of 18 straight games overall, eight home games, 25 games against power conference opponents, 28 games away from Hilton Coliseum, 25 true road games and 19 games to ranked opponents. It’s truly been an unexpected and amazing start for the Cyclones.