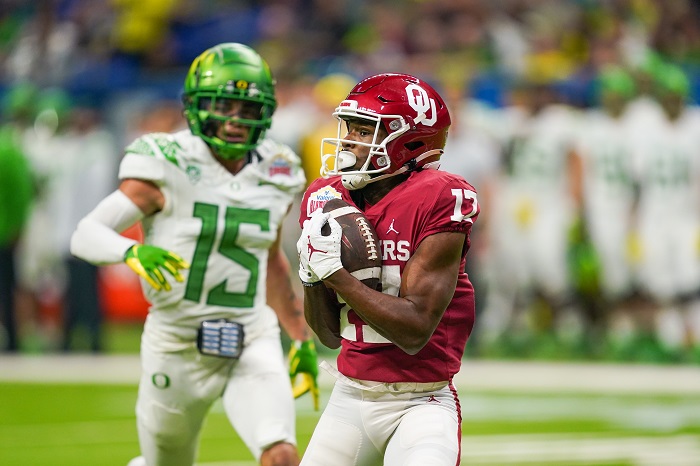 The Oklahoma Sooners defeated the Oregon Ducks, 47-32, in the Alamo Bowl on Wednesday, giving the Sooners a victory to end the 2021 season.

Bob Stoops coached his first football game since he retired after the 2016 season, doing so on an interim basis as the program transitions from his successor, Lincoln Riley, to Brent Venables. Riley took the job at USC, and the Sooners (11-2) hired Venables away a week later from Clemson, where he was the defensive coordinator. The father-son moment Sooners fans hoped for came to pass in the second quarter, as the elder Stoops got to greet his son, Drake, after Drake caught a touchdown pass.

Oregon had personnel issues going into the game, and those were well-documented. The Ducks were without 31 players, though none of them were out due to COVID-19. The Sooners were without several players too, including opt-outs like linebacker Nik Botinno, linebacker Brian Asamoah, defensive lineman Perrion Winfrey and defensive end Isaiah Thomas. All four opted out to prepare for the 2022 NFL Draft.

Winfrey even took the time to throw a little shade at Riley during the game.

The Sooners had a 30-3 lead after the first half, and while the Oregon (10-4) offense did come alive in the second half, scoring four straight touchdowns, the Sooners remained comfortable in securing the win. At one point, Oklahoma scored six touchdowns on seven straight drives, with the seventh drive resulting in a field goal.

The departure of former Sooners head coach Lincoln Riley to USC left a lot of collateral damage. Several recruits decommitted. Several players opted to head for the NFL, even after the Sooners installed Stoops as interim head coach. Sooners like Spencer Rattler hit the transfer portal.

One player many thought might go in the direction of the transfer portal was wide receiver Marvin Mims. In the lead-up to the Alamo Bowl, he made it clear he felt his future was at Oklahoma.

If that remains the case after the Alamo Bowl, expect a lot more of what we saw in the second quarter in 2022. Quarterback Caleb Williams’ 55-yard touchdown pass to Mims was a thing of beauty, and it was Mims’ only catch of the first half. Mims is already considered a quality deep threat. He didn’t lead the Sooners in receptions (30), but he led them in yards per catch (21.6), and that was more than double the next receiver (Jadon Haselwood, who is transferring to Arkansas). But Mims scored just four times in 2021. That’s the part the Sooners need to take more advantage of in 2022.

Williams and Mims look like a combination that has the potential to dominate the Big 12 in 2022. Williams has the big arm to make efficient use of Mims’ top-level speed, and new offensive coordinator Jeff Lebby has to be giddy at the prospect of working with both of them.

2. The OU Defense Did What it Had to Do (in the First Half)

The Sooner defense certainly lost some talent to opt-outs, and the remaining defensive players could have dwelled on that. But, they didn’t. An early interception by Justin Broiles off a deflected pass set the tone for a first half in which the Sooners gave up just three points, 205 total yards and held the Ducks to a 2-for-7 clip on third down. Aside from the Broiles interception, the first half wasn’t filled with many game-changing plays. But the remaining Sooner defensive staff had the unit prepared. They didn’t miss many assignments, they tackled well and they kept Oregon from creating any real momentum on offense. Holding the Ducks to a field goal early in the game, despite the Ducks getting inside the Sooners’ 10-yard line, turned into a big possession for the Sooner defense.

Now, the second half? The Sooners took a step back as the Ducks scored four straight drives. Fortunately, the Sooner offense kept scoring touchdowns of their own to keep the Ducks from making it a meaningful game. The job next season for the new defensive staff, led by new coordinator Ted Roof, is to mold the Sooners back into a unit that can start to shut down opponents again.

Kennedy Brooks, the redshirt junior running back, didn’t address his future in the ramp-up to the Alamo Bowl. He made it clear he wasn’t opting out of the game but didn’t want to disclose what he might do after the game. He could transfer. He could head for the NFL. He could also decide to play another year at Oklahoma.

The Sooners have to be hoping he doesn’t. But, if Brooks decides to move on, he had a great game for the Sooners in the Alamo Bowl, rushing for 142 yards and three touchdowns, and catching another three passes for 24 yards. He used one of his own receptions to set up his third touchdown run.

Brooks has rushed for more than 1,000 yards in each of the three seasons he’s played in Norman (he opted out of the 2020 season due to COVID-19). If that was it, he leaves Norman and the Sooners with a wonderful final game.