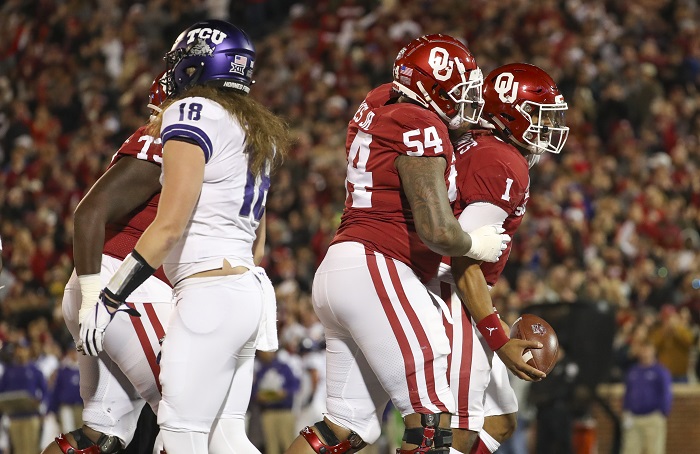 Oklahoma has lost another piece of its 2021 team as starting left guard Marquis Hayes has declared for the 2022 NFL Draft.

Hayes has been a permanent fixture of the Oklahoma offensive line for three seasons, starting in 37 of the last 38 games in his career.

At 6’5″ 325-pounds, Hayes’ physical presence was downright nasty at times in his career in Norman, but had an up-and-down 2021 season. Hayes was wildly inconsistent at times throughout the year, which is unlike him, and looked like a shell of his former self.

Here is Hayes’ announcement on Friday afternoon from his Twitter page.

“Thank you to the coaching staff ESPECIALLY, Coach B [Bill Bedenbaugh] for helping me develop into the man I am today on and off the field,” Hayes wrote. “Thank you to my teammates for the bond and brotherhood we have built. It has been a goal of mine to compete at the highest level.

“With that being said, I will be foregoing my final year of eligibility and declaring for the 2022 NFL Draft. I am proud to forever and always be a part of Sooner Nation.”

Hayes joins Jeremiah Hall (TE/H-Back), Kennedy Brooks (RB), and Gabe Brkic (K) as the four Sooners to declare for the NFL Draft following their 47-32 win over Oregon in the Alamo Bowl.