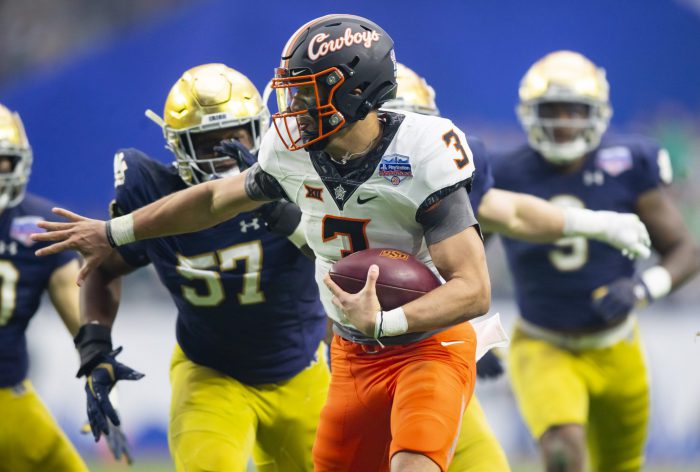 1. The Defense was Awful in the First Half

I know losing defensive coordinator Jim Knowles was a big loss for Oklahoma State, but I didn’t think it would have looked so bad without him. The defense played their worst half of football of the entire season as they gave up a whopping 28 points which was the most points they gave up all season (The defense only gave up 24 to Oklahoma in Bedlam). The Cowboys were torched through the air as Notre Dame quarterback Jack Coan threw for 342 yards and four touchdowns in the first half. Supposedly three Oklahoma State defensive coaches (Dan Hammerschmidt, Tim Duffie, and Joe Bob Clements) were sharing play calling duties on defense and I can confidently say that something didn’t click in the first half for the Cowboys defense.

2. The Defense Adjusted in the Second Half

The last time we saw Spencer Sanders play before the bowl game was in the Big 12 championship game. Against Baylor, Spencer Sanders turned the ball over four times as the Cowboys lost a heartbreaker in Jerry World. He redeemed himself against Notre Dame in the Fiesta Bowl as he threw for 371 yards and four touchdowns and also led the team in rushing with 125 yards on the ground. Spencer played a great game and did an excellent job leading his team. He has had his up and down moments this season and it was nice to see him end the year on such a high note. I know it’s easy to criticize him due to the past, but he definitely earned the offensive MVP award on Saturday.

When Oklahoma State was up 31-28 in the fourth quarter, wide receiver Brennan Presley was about to cross the goal line and ended up fumbling the football giving the ball back to Notre Dame. Luckily, the Cowboys defense got the stop but then later in the fourth quarter with less than three and a half minutes left, Spencer Sanders also turned the football over inside the Notre Dame 20-yard line. Once again, the defense held Notre Dame scoreless and got the ball back for the offense. Normally that would be very costly for a team but thanks to the defense, it didn’t hurt the Cowboys and they are extremely fortunate for that.

5. What a Year for Oklahoma State

Nobody was talking about Oklahoma State before the season as they were picked to finish fourth in the Big 12. Despite their early struggles, the Cowboys reeled off six straight wins to start the year and ended the regular season with an 11-1 record. During their five-game win streak to end the regular season they managed to knock off the Sooners for the first time since 2014 and earned a trip to play in Jerry World for a Big 12 title. While they ended up falling short against Baylor in the title game, they still got the chance to play in the Fiesta Bowl and took advantage of it. Oklahoma State finishes the 2021 season with a 12-2 record and are Fiesta Bowl champions. I would say that is one hell of a year and hats off to Mike Gundy and Jim Knowles (now at Ohio State) for coaching up this team.