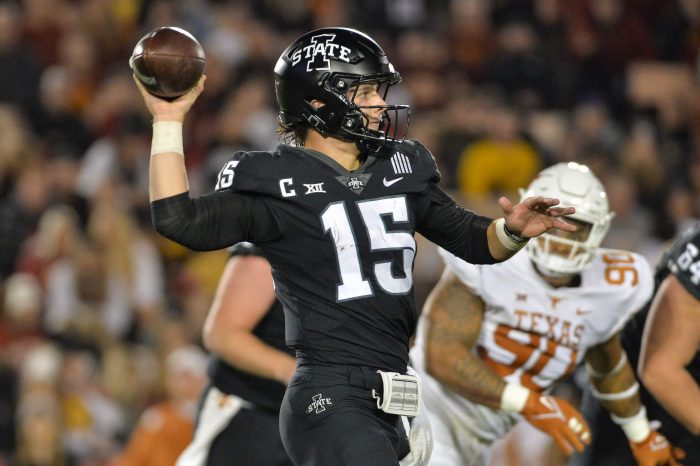 The best quarterback in Iowa State history is headed to the next level, as Brock Purdy has declared for the 2022 NFL Draft according to his mother’s Facebook profile.

“A Tug on my Heart as One Chapter Closes in our Lives One More Opens! Brock has Declared for The NFL & is already moved into his new Place & training in Florida! ❤️ We want to Thank Ames, IA. Coaches, Teammates, Family, Friends & The Best Fans Ever-for 4 of the Best Years of our Lives! Our Family will be Forever Grateful for our Memories & Friendships that will last a Lifetime!❤️ Cyclone Family Forever!”

Purdy, a senior, holds over 25 records at Iowa State, including career passing touchdowns (81), career passing yards (12,170), career completions (993), and career passing attempts (1,467). Purdy was responsible for exactly 100 touchdowns, according to Iowa State’s official website, which is 38 more scores than Bret Meyer had (62), who held the record before Purdy.

According to his mother, Carrie Purdy, Brock is already training in Florida, in preparation for the Draft in April. His name will likely be called sometime early in day three of the draft, meaning that he shouldn’t be thrown into the fire of being a franchise quarterback immediately. That should give him time to develop, and if he gets into the right system, Purdy’s arm strength and athleticism should be enough to make him a viable option at quarterback for an NFL franchise.

Purdy was part of the 2017 class at Iowa State that changed the culture and mindset of what Iowa State meant. Iowa State used to be the doormat of the Big 12, similar to what Kansas has been over the last decade or so. Now, every time that the Cyclones take the field they are a tough out and a lot of times will win a game solely because of their grit and determination.

Head coach Matt Campbell has changed the culture in Ames, Iowa, and Brock Purdy’s class was the first group to make that change. Purdy was the first Iowa State quarterback to go bowling in every season he was there, including the Cyclones’ first New Year’s Six victory with a 34-17 win over Oregon in the 2020 Fiesta Bowl.

In 2022, Iowa State will have to move on from Purdy and try to find consistency at quarterback elsewhere. They will likely turn to Hunter Dekkers, a freshman out of Hawarden, Iowa. Dekkers took over for Purdy in the Iowa game in Week 3 after Purdy threw three costly interceptions. Dekkers looks like the future in Ames, but the job won’t just be handed to him. He will have to battle Aiden Bouman and underrated 2022 enrollee Rocco Becht in the spring to decide who is at the helm next season.

Super Bowl LVII is set for Sunday, February 12, with the Kansas City Chiefs and the Philadelphia Eagles battling for the Lombardi...