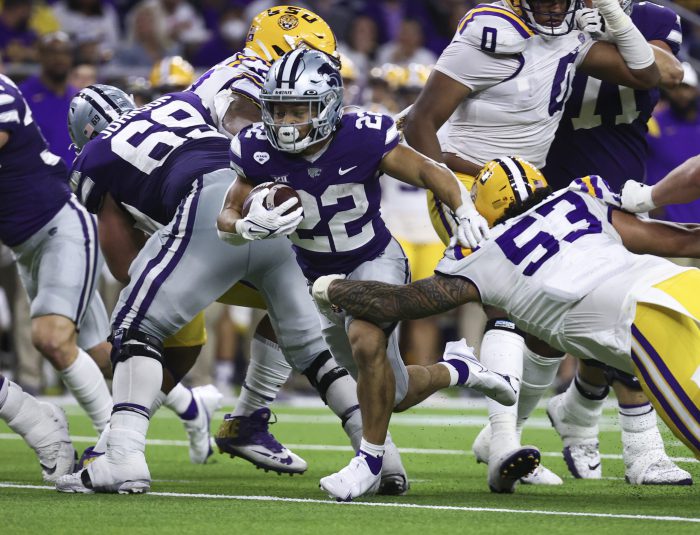 The end of the Big 12 football season is unfortunately here. After a full week of Big 12 bowl games last week, Tuesday night was the grand finale of the Big 12 bowl season as Kansas State took on LSU in the Texas Bowl. It was a game to remember because it was Skylar Thompson’s last game at Kanas State and because the Wildcats put on a beat down to remember on LSU. Here are my five thoughts on Kansas State’s win over LSU in the Texas Bowl.

In his final game as a Wildcat, Skylar Thompson had a performance to remember. The sixth-year senior threw for 259 yards and 3 touchdowns in the dominant bowl win over LSU. He certainly made the last game count and I appreciate everything Skylar has done at Kansas State. Not only is he the winningest quarterback in school history but he also was a great leader who was the face of the Kansas State program for so many years. It is going to feel weird without him being the quarterback next year in Manhattan, Kansas. With that said, thank you for Skylar. You are one hell of a football player and were fun to cover over the years.

There aren’t many players in the Big 12 who I honestly believe can win a Heisman trophy, but Deuce Vaughn is one of them. The talented running back put on a clinic running the football on Tuesday night with 146 rushing yards along with 3 touchdowns. LSU stood no chance trying to slow him down as he broke off a few big runs against the Tigers defense. It doesn’t matter if you throw it to him or hand it off, the goal for the 2022 Kansas State offense should be finding creative ways to get the football in Deuce Vaughn’s hands.

When Kansas State let go of offensive coordinator Courtney Messingham, Chris Klieman turned to former Kansas State quarterback Collin Klein to call the plays in the bowl game. I thought Collin did an excellent job mixing things up even though LSU was a little shorthanded in the game. I’m not sure how long Collin’s title will last but I do believe he should get a serious look at being the offensive coordinator for next season.

LSU was down a few players on offense, but Kansas State’s defense came to play in the Texas Bowl. Even with the garbage 81-yard touchdown as time expired, the Wildcats held LSU to 308 yards. The Tigers couldn’t throw the football and Kansas State took advantage of that. This game was never close and at one point Kanas State was up 42-7 before the backups came in. You can say what you want about LSU, but this game showed the country how good of a football team Kansas State is on both sides of the football.

This was the last Big 12 football game of the season and what a bowl season it was for the Big 12. The conference went 5-2 in their seven bowl games and went 3-0 against the SEC. Even the future members of the Big 12 had success against SEC teams by going 2-1. While I am sad about the Texas Bowl being the last game until September, I am excited about the future of the conference going into next season.