Recruiting 18 year-old-kids to play football for you is more difficult than parking a sports car in the street and posing with them in front of it for a photo, right?

Highly touted USC transfer QB Jaxson Dart posed with Kiffin and his Aston Martin over the weekend and it took off on Twitter.

Here’s a look at the photo, which Dart posted and tagged Lane Kiffin in. He is rocking Ole Miss gear and posing with the rockstar’esque head coach in what looks like some sort of album cover.

James Bond drove an Aston Martin, hence the “007” reference. That’s also the number of points scored by Ole Miss against Alabama in the first three quarters of the “popcorn” game this year, 0-0-7. Go figure.

According to On3Sports’ Gerry Hamilton, Dart has cut down his list of landing spots to Oklahoma, Ole Miss, and TCU; though it has been speculated recently that this is a two-horse race between Oklahoma and Ole Miss. All three schools will be under new offensive regimes in 2022, and it will be a huge addition for whichever program he chooses in the coming days.

Dart entering the transfer portal was set into motion when former Oklahoma quarterback Caleb Williams visited USC last weekend. Williams is thought to be a USC lock and is expected to announce that he will play for Lincoln Riley and the Trojans in 2022 any day now. 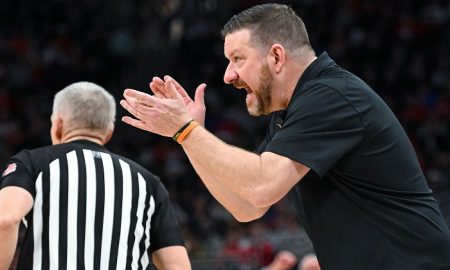 Nik Bonitto Appears to Call Out Former Teammate Mario Williams in Cryptic Tweet
Lincoln Riley: Once a Hero in Norman, Now the Villian
To Top