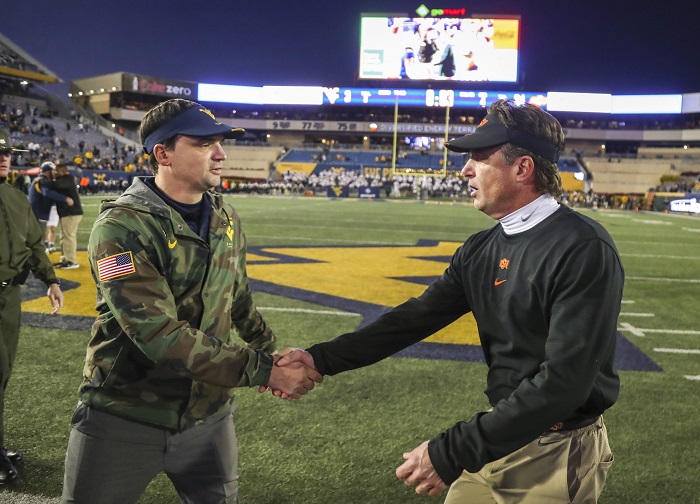 After the Big 12 announced that it intends to create two seven-team divisions in 2023, people began to think a little more deeply about what those divisions might look like.

HCS’ own Derek Duke chimed in early to make the case for a North/South split over an East/West one, which was also proposed by our own Pete Mundo. As usual, Duke makes a lot of great points, particularly about how unbalanced an East/West split would leave the conference, but the North/South split has flaws too, as Mundo notes in his piece.

One thing to consider is that the Big 12 reportedly would like to put Oklahoma and Texas in separate divisions so that the divisions can remain the same after the two depart for the SEC.

Another concern is that a North/South split would put BYU in the same division with WVU and Cincinnati. Ouch.

It’s a can of worms that defies a strictly geographical answer because a North/South split and an East/West split both have serious flaws.

The first two points to consider when trying to divide up the new Big 12 into divisions are:

These points show that it does make sense for the league to put Oklahoma and Texas in separate divisions and that geographic clusters are more important than directional lines. Here are the main clusters:

Granted it could be argued that Oklahoma (Norman) is a lot closer to TCU (Fort Worth) than it is Iowa State (Ames), but again, it only makes sense to split Oklahoma and Texas up, and Oklahoma has more history with the Big 8 teams than it does with TCU, Baylor, or Houston.

The first and easiest step to make when dividing the conference into two divisions is to start with the two biggest clusters: the old Big 8 and Texas:

This leaves each side needing two more teams. However, the four teams remaining are in Cincinnati, Morgantown, Orlando, and Provo.

Moreover, it only makes sense to keep Cinci and WVU together, which could mean putting BYU and UCF in the same division. Nope. That won’t work.

DEALING WITH THE DISTANCE

UCF’s closest Big 12 rivals will be Cinci and WVU, so it only makes sense to put those three in the same division. The problem, of course, is that we need the divisions to have equal numbers.

So what to do?

BYU’s closest Big 12 rival will be Texas Tech, but it is otherwise closer to the Big 8 schools than the Texas schools.

This would mean that the other division would be Baylor, Cincinnati, Houston, TCU, Texas, UCF, and WVU.

It’s not North and South or East and West, yet it still makes the most geographic sense. Moreover, Duke’s concern about keeping the divisions fairly evenly matched in football and basketball is also addressed.

Sometimes coloring outside the lines makes the most sense.