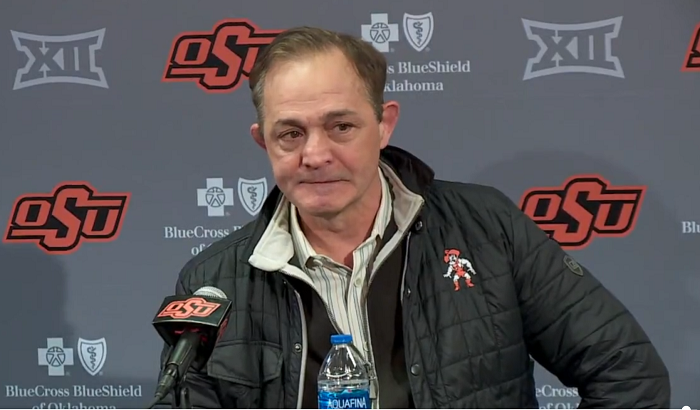 The Oklahoma State community is reeling after star wrestler A.J. Ferrari was involved in a car wreck on Monday night.

One of the craziest parts of the story is that Oklahoma State football offensive coordinator Kasey Dunn, who was coincidentally in a car that Ferrari passed, witnessed the crash and was able to pull Ferrari to safety after the SUV caught on fire.

ESPN’s source said that Dunn was unable to open the driver’s door to get Ferrari out but that he was able to pull Ferrari out of a window after the glass had shattered in the crash.

Oklahoma State wrestling coach John Smith held a press conference on Tuesday and commented on Dunn’s actions, saying, “I don’t know how many people would go to a car that was on fire and try to pull someone out, but I’m sure glad Coach Dunn was there.”

Smith explained the situation as he understands it, and said Dunn told him that he pulled Ferrari out of the car with someone else, while adding, “[Kasey] did tell me that a big man showed up and helped him figure out how to get [Ferrari] out [of the car], and then all of the sudden this guy was gone. Disappeared.”

Here’s the full video on what Smith had to say about Dunn.

Ferrari was in Cushing, Oklahoma on Monday, making an appearance at a youth practice.

The Oklahoma Highway Patrol released the crash report late Monday night. It says Ferrari struck a pickup truck head-on while trying to pass three cars in a no-passing zone just east of Perkins on State Highway 33. After hitting the vehicle, Ferrari’s car turned an unknown number of time. The 56-year-old driver in the pickup truck was not injured.

Late on Monday night, OSU Athletics releases a statement noting that Ferrari’s injuries were “not life-threatening.” Also, OSU All-American cross-country runner Isai Rodriguez was with Ferrari and is being treated for “minor injuries.”