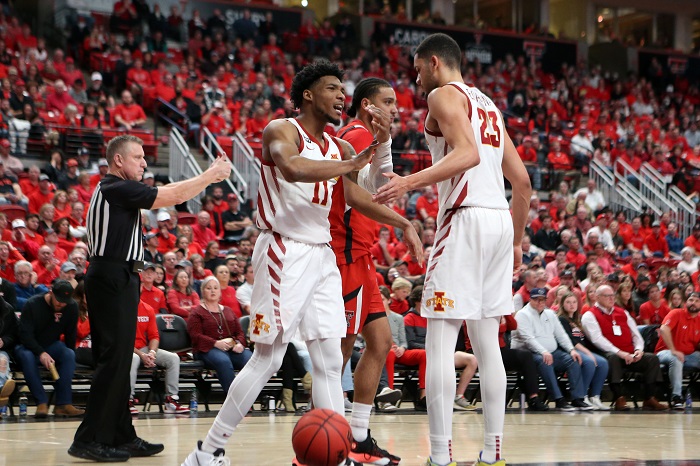 Here is everything you need to know about the Iowa State Cyclones and the Texas Longhorns in our Iowa State vs. Texas Big 12 men’s basketball preview.

G Izaiah Brockington: The two-time Big 12 Player of the Week is the one thing the Cyclones can rely on offensively. He scored 24 points against Kansas on Tuesday night, and for the season he’s their leading scorer and rebounder, with 17.1 points and 7.8 rebounds per game. But he also can’t do it all.

G Tyrese Hunter: The true freshman averages 10.5 points, three rebounds, 4.7 assists and two steals per game. The Naismith Defensive Player of the Year Award watch list member had eight points, two rebounds and two assists against Kansas. It wasn’t quite as productive a game as the Cyclones were probably hoping for. He’s likely reached his offensive ceiling in the near-term. But, looking down the road, he has the potential to be ISU’s dominant force for seasons to come.

G Tre Jackson: One of the few holdovers from the Steve Prohm era has had his moments off the bench, and he had one on Tuesday night. He scored 12 points in 22 minutes, and all of them came on 3-pointers. Jackson has good range from distance, but he doesn’t get to unwind it enough. But, when he does, he hits nearly 40 percent of them. Perhaps the time has come to give Jackson a bigger role, as the Cyclones need consistent scoring around Brockington.

F Timmy Allen: Allen did not have a good game against Texas Tech, as he had just five points and five rebounds. The Red Raiders paid particular attention to Allen and limited his effectiveness. But, normally, he’s UT’s most consistent frontcourt player. He averages 11.5 points and 6.5 rebounds per game. He leads Texas in both categories. He’s one of the most versatile forwards in the Big 12, and his passing skills are underrated.

G Marcus Carr: He continues to grow in this system, especially when it comes to facilitating the offense and making others better. But there are times the Longhorns need him to score, as he did against Texas Tech when he scored 18 points. Texas is at its best when he, Courtney Ramey and Andrew Jones are all clicking. When it’s just two of the three, they’re still competitive. Carr averages 11 points per game and leads the Longhorns with 72 assists.

F Christian Bishop: Bishop doesn’t always start for Texas, but he did on Tuesday against Texas Tech when head coach Chris Beard opted to use a bigger lineup. Bishop had 11 points and eight rebounds in just 17 minutes, and frankly he was the best forward on the floor for Texas. For the season he only plays about 17 minutes per game and averages 6.1 points and 4.8 rebounds per game. It’s likely he comes off the bench on Saturday given the matchup.

The Cyclones enter the back end of the season with just three wins in nine Big 12 games, but still firmly in the NCAA Tournament, per ESPN Bracketology. The Cyclones can’t win the Big 12 regular-season title, but they can manage their way into the NCAA Tournament. The league’s incredible overall NET rating will likely keep the Cyclones from dropping too far off the selection committee’s radar. After Texas, the Cyclones have one game remaining against a currently ranked team. Of course, the Cyclones have four wins against ranked teams this season, and their defense is capable of keeping them in every game they play.

Texas has a tough road to win a Big 12 regular-season title, now three games back of Kansas. Plus, there’s the emotional fallout of Tuesday’s loss to Texas Tech. Or, perhaps, the emotional exhaustion of the Red Raiders’ fan base taking their collective rage out on Texas coach Chris Beard for 40 minutes. Texas had won three games in a row prior to the Texas Tech loss and they have these moments of maddening inconsistency. They’re not a consistently great 3-point shooting team, and they’re at their best when the offense runs through Allen and dribble-drive penetration led by Carr, Ramey and Andrew Jones. Plus, the Longhorns have a great defense.

The Cyclones are trying to sweep the regular-season series with Texas for just the second time. The first time came in 2015. Iowa State has won twice in Austin — 2005 and 2015.

Texas 78, Iowa State 69. It’s a really hard game to project because one is unsure if Tuesday’s loss to Texas Tech was fuel for the Longhorns or will end up draining them. My bet is the former and they pull away in the second half.