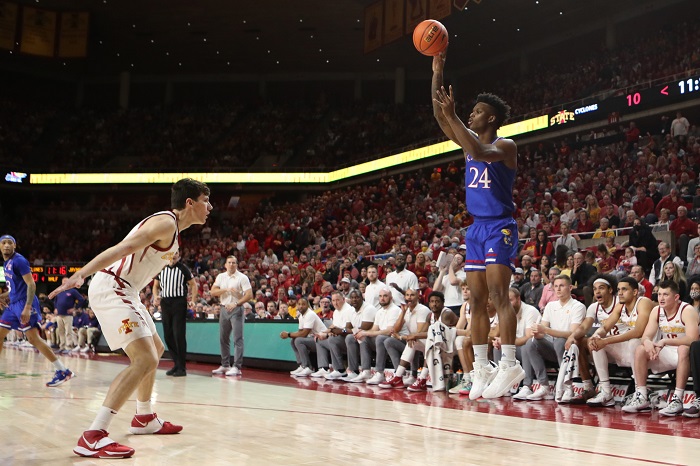 The Kansas Jayhawks are one of three Big 12 teams in the Top 10 of the Associated Press Men’s Basketball Top 25, released on Monday.

Meanwhile, Iowa State fell out of the Top 25, leaving the Big 12 with four overall teams in the Top 25.

The Cyclones, who were No. 20 last week, fell out of the Top 25 after two losses last week. The Cyclones still received 48 votes.

Baylor (19-4, 7-3) started the week defeating West Virginia, 81-77, without guards L.J. Cryer and Adam Flagler. After getting Flagler back, the Bears lost to Kansas, 85-59. The Bears start this week with a road game at Kansas State on Wednesday and then a home game against Oklahoma on Saturday.

Texas Tech (18-5, 7-3) won both games last week, defeating Texas, 77-64, and West Virginia, 60-53. The victory over Texas was the Red Raiders’ first against former head coach Chris Beard. The Red Raiders are at Oklahoma on Wednesday and host TCU on Saturday.

Texas (17-6, 6-4) started last week with its 77-64 loss to Texas Tech but followed it by blowing out Iowa State at home, 63-41. The Longhorns are set to take on a brutal stretch the next two week, which starts with a home game against Kansas on Monday and a trip to Baylor on Saturday.

Iowa State (16-7, 3-7) played two ranked teams last week, but lost both games, falling to Kansas, 70-61, and Texas, 63-41. The Cyclones fell out of the Top 25 for the first time since late November. Iowa State is prepping for a game at West Virginia on Tuesday and a home game against Kansas State on Saturday.