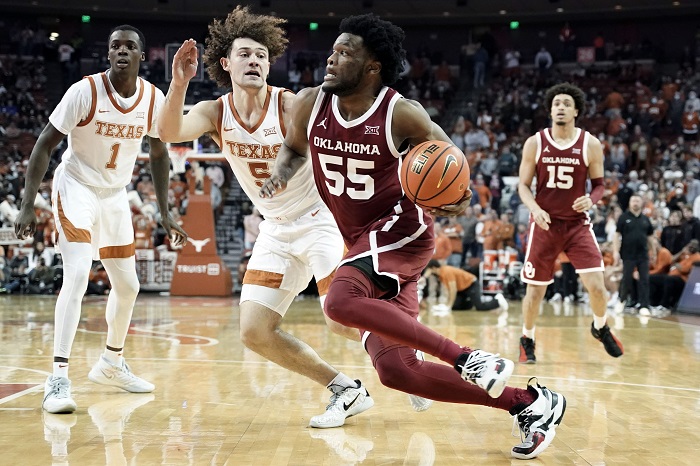 The Oklahoma Sooners are the only Big 12 team in NIT Bracketology and are trying to fight their way out of that and into the NCAA Tournament.

The Sooners (16-14, 6-11 in Big 12) defeated West Virginia, 72-59, on Tuesday, the Sooners’ second straight victory. Before Tuesday’s contest, the Sooners were considered a No. 3 seed in DRatings.com’s NIT Bracketology.

The site is one of the few that does a bracketology for both the NCAA Tournament and the NIT. After DRatings.com completes its 68-team NCAA Field, it puts together a 32-team NIT field.

But the Sooners are the only one now. The Mountaineers (14-16, 3-14) are now under-.500 and have lost their last seven games entering Saturday’s home finale against TCU.

Kansas State (14-15, 6-11) was at one point on the NCAA Tournament bubble, according to ESPN. But, the Wildcats have now lost four straight games heading into Saturday’s finale against Oklahoma. The game is key for both teams. If the Sooners can win on Saturday, they can avoid having to play on the first day of the Big 12 Tournament.

The question now is whether the Sooners could do enough to claw out of the NIT. With a win on Saturday, and at least one win at the Big 12 Tournament, the Sooners would reach 18 victories.

On Tuesday, ESPN.com released its updated and projected 68-team fields for the men’s and women’s tournaments. On the men’s side, six Big 12 teams made the field, with both Baylor and Kansas as No. 1 seeds. Six Big 12 teams also made the women’s field, with four teams — Baylor, Iowa State, Oklahoma and Texas — among the Top 16 teams in the tournament.