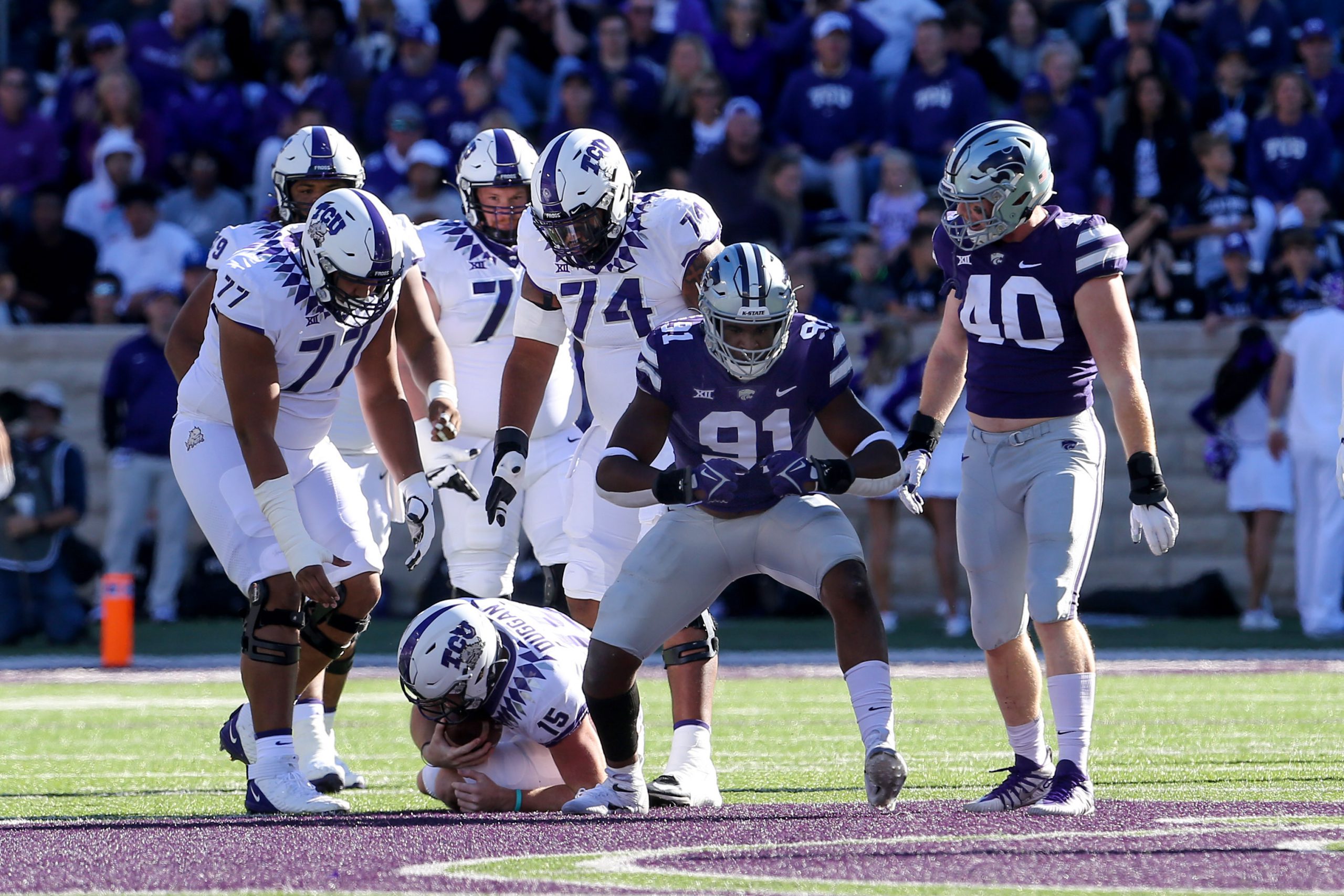 Defensive ends offer the sizzle and the steak. They’re the sack artists, the big men with terrifying speed and wingspan who can change the entire complexion of a game in a single explosive moment. Having even just one elite defensive end on the field can take a good defense on any given down and make it great.

McDonald co-ledBig 12 in 2021 (with Collin Oliver, see below) with 11.5 sacks, 10 solo. Many expected him to be an NFL draft pick this year, but he opted to return to ISU for his senior season. He often attracts double-teams from opposing blockers, but he continues to make plays regardless. McDonald should be set to turn in an All-American type of season in 2022. However, the departure of his bookend, DE Eyioma Uwazurike, for the NFL draft will likely mean even more attention will be paid to McDonald by opposing offenses.

As a redshirt freshman, Uzomah co-led the Big 12 last season (with Collin Oliver, see below) in solo sacks with 11, and he actually had two more that the NCAA later ruled forward rushes because he stripped the ball in the process of sacking the quarterback and the ball was recovered by the defense beyond the line of scrimmage. Barely recruited out of high school, K-State was Uzomah’s only P5 offer, and his development last season is a bright feather in the cap of Chris Kleiman’s coaching staff. With the return of his strongside bookend DE Khalid Duke (see below) from injury, Uzomah could be in for an even bigger season in 2022.

The Dallas Morning News recently proclaimed that Wilson, a 2022 senior, has the potential to be the Big 12 Defensive Player of the Year in 2022. I agree that Wilson has the talent to do it, but I question whether he has the supporting cast as Tech’s D-line could be very green this season, not to mention the challenge of learning an entirely new scheme. Nonetheless, be sure to keep an eye out for Wilson every time Tech is on defense this season. He’s a special player, and I would not be surprised if he eclipsed last season’s six sacks with ease.

Dante Stills will remain the leader along the Mountaineers’ defensive front, but this article is about defensive ends, not interior linemen, and Alston will have a shot in his redshirt senior season to make a lot of noise in Morgantown. It was a long road back from a knee injury sustained in 2019 against Missouri, but Alston had a notable 2021 after sitting out the 2020 season. Alston came up with five sacks in 2021 and 11 tackles for loss. I expect his upward trajectory to continue with what could be a very salty defense if some holes can be filled.

With Ochaun Mathis and Khari Coleman no longer on the roster, 2022 is the year for Horton to elevate his game in a big way. A former transfer from New Mexico, Horton posted four sacks last season to show significant improvement from 2020. If that improvement continues along the same trajectory, he could fill a big hole for the Horned Frogs defense and make name for himself in the Big 12.

Franklin, a senior, has 6.5 career sacks with four of them coming during the 2021 season. I expect him to continue to improve in his third year with defensive mastermind, head coach Dave Aranda. With Saikia Ika holding down the interior of the Bears’ defensive front, Franklin should be able to make his presence felt with more frequency in 2022.

Collins has 3.5 sacks in two seasons with the Longhorns. Entering his junior season, he’s likely to play a major role as Texas tries to improve its pass rush. The Longhorns’ defense was mediocre last season, but that could change in a hurry as players like Collins find their groove in year two of the Steve Sarkisian era. Collins is long and quick, so if any of Texas’ defensive ends take a leap forward into stardom, I like his chances to be the one.

With Isaiah Thomas gone, Grimes looks to be the next dominant defensive end on Oklahoma’s defense after a strong performance in the Alamo Bowl against Oregon’s offense. He had two sacks last season (three in his career) and two forced fumbles. Grimes will be a redshirt sophomore in 2022, so he lacks the wily maturity of some of the other great defensive ends in the league, and the switch to new head coach Brent Venables’ defense will be a challenge, but Grimes has the raw ability to make plays, and I expect to see him start to really come on in the second half of the season.

Debose transferred to KU from Virginia Tech after the 2020 season and netted two sacks for the Jayhawks in 2021. With KU’s leading sack artist, Kyron Johnson, no longer on the roster, Debose has the opportunity as a super senior to step up and make his presence known. KU’s defensive line struggled mightily at times last season, but Debose has the talent to help turn that around in 2022.