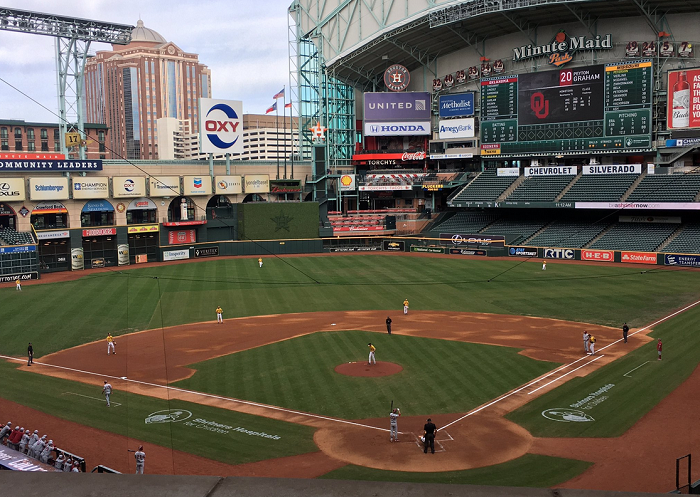 With the MLB lockout still in effect, why not take in some college baseball? We are in the third full weekend of the season as all nine Big 12 teams (sorry Iowa State) are back in action on the diamond this weekend. There are several big-time matchups around the conference and here is what happened in the Big 12 on Friday.

There was a great pitching battle on Friday afternoon to start off the tournament down in Houston. Both UCLA’s Jake Brooks and Baylor’s Tyler Thomas played extremely well and fortunately things went Baylor’s way late in the game. It was a scoreless game until the fourth inning where Kyle Nevin went yard for a two-run shot to give Baylor a 2-0 advantage. From there, Tyler Thomas took over on the mound as he struck out ten batters on the day. Then with the bases loaded, closer Mason Marriott finished the deal.

There always seems to be one wild game per day in this tournament and this was that game. Thanks to an error, the Sooners got on the board first in the fifth inning before Kendall Pettis hit a solo blast two innings later as Oklahoma had a 2-0 lead. However, the Tigers would score a run later in the seventh inning and two more to tie the game in the eighth inning due to Cade Doughty’s two-run homer. The game ended up going to extra innings as both teams traded runs in the tenth inning, but LSU had the last laugh scoring the winning run in the bottom of the eleventh as Jordan Thompson hit a walk off bomb.

Just like in the Baylor game, we had a good pitching battle going on between Texas’ Pete Hanson and Tennessee’s Chase Burns. The Vols scored the first run of the game in the fifth inning when Evan Russell hit a solo blast, but Texas responded later in the inning with a home run from Trey Faltine. In the next inning, Ivan Melendez drove in a run and so did Skyler Messinger. Also, an error helped the Longhorns as well. After getting their 4-1 lead, Texas followed up their sixth inning with another big one in the seventh adding three more to the scoreboard thanks to Melendez once again and Murphy Stehly.