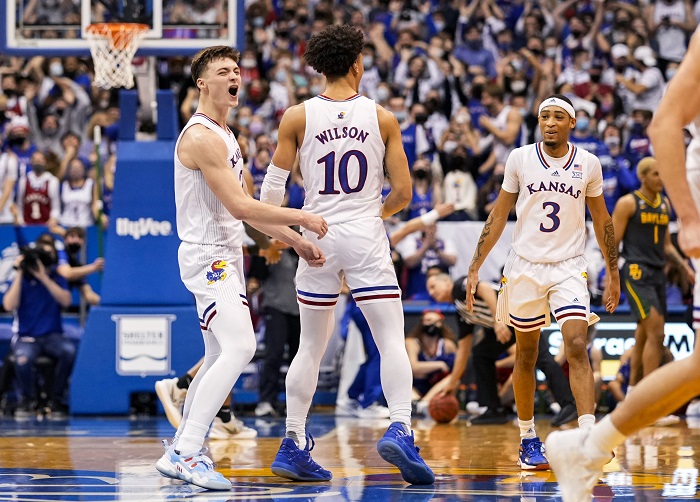 KANSAS CITY, MO — It wasn’t Allen Fieldhouse, but T-Mobile Center in Kansas City sure did feel like it at times as Kansas dominated TCU on their way to a 75-62 win in their Big 12 Basketball Tournament semifinal match up.

Out of the gates, TCU was not intimated by essentially playing in a true road atmosphere, jumping out to a 9-7 lead, including a quick four points from Eddie Lampkin. But Christian Braun’s three-pointer at the 15:18 mark of the first half put the Jayhawks back on top in a game they would then never relinquish. His triple sparked an 11-0 run that was also highlighted by a strong defensive effort, including a pair of turnovers that had the Jayhawk faithful roaring after a shot clock violation from the Horned Frogs. Kansas took a dominant 44-30 lead into halftime and cruised in the final 20 minutes, punching a ticket to Saturday night’s title game for the first time in three years.

One night after dropping 18 points against West Virginia, Ochai Agbaji scored 22 to lead the way for the Jayhawks, finishing 9-17 from the floor and 2-6 from three-point range. However, the KU fan favorite of the night was Mitch Lightfoot, who scored a season-high 15 points on 6-8 shooting and five rebounds. As a team, KU shot 50% from the floor to Saturday night’s Championship Game.

“I thought we played pretty well, consistently, the whole night… I thought our defense was the best it’s been in a while,” said head coach Bill Self.

As for TCU, Chuck O’Bannon and Mike Miles led the way with 15 and 14 points, respectively. After a hot start, Eddie Lampkin finished with only 8 points and 4 rebounds. The Horned Frogs will now await their seeding on Selection Sunday.

Kansas is trying to win its first Big 12 Tournament Title since 2018, when they beat West Virginia 81-70 and Malik Newman was named the Tournament MVP. If KU gets it done on Saturday night, it would be their 12th Tournament Title in Big 12 history.

The Jayhawks will play in the Big 12 Basketball Tournament Championship Game on Saturday night at 5:00 p.m. CST against the winner of the Oklahoma vs. Texas Tech game.