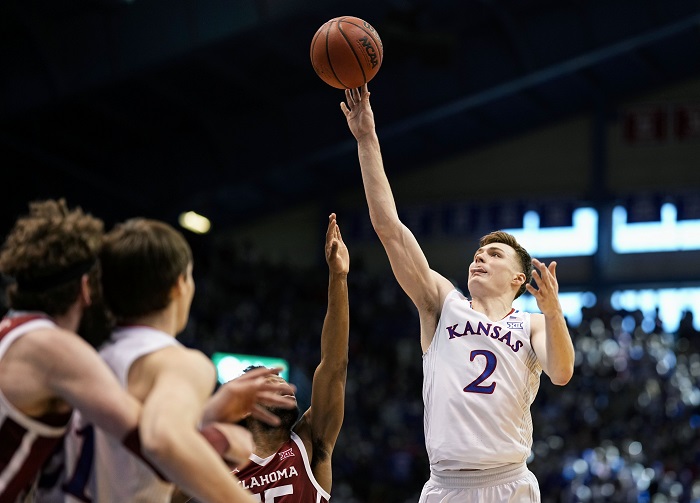 Here is everything you need to know about the Kansas Jayhawks and the Texas Tech Red Raiders in our Kansas vs. Texas Tech Big 12 Tournament men’s basketball preview.

Winner gets: The Big 12’s automatic berth into the NCAA Tournament.

Kansas G Ochai Agbaji: If Kansas wins, the senior guard is likely to be the Tournament’s Most Outstanding Player. He had a 22-point game against TCU on Friday night, and before that he scored 18 points as the Jayhawks cruised by West Virginia in the quarterfinals. He’s capable of carrying the Jayhawks on his back if needed, but to this point he’s had plenty of help. He is on the final ballot for the National Player of the Year award and was the Big 12 Player of the Year selection by Heartland College Sports, the Big 12’s coaches and the Associated Press. He’s a presumed lottery pick for the NBA Draft, but for now he’s set on trying to get the Jayhawks to a Big 12 Tournament title and a No. 1 seed in the NCAA Tournament. Entering the Big 12 Tournament he was averaging 19.8 points, 5.2 rebounds, 1.7 assists and is playing 35 minute per game. He’s also dangerous from the 3-point line.

Texas Tech G Adonis Arms: The talented guard is one of many Red Raiders that have helped them get to this point. Arms had nine points against Oklahoma on Friday, and it was his second game in the tournament with nine or more points. He had 10 points against Iowa State. The Red Raiders have played low-scoring games to this point, so the premium is on players like Arms being efficient, and he has been. He’s shot 50 percent or better in both games. While Tech doesn’t have a true point guard, Arms has turned into one of the Red Raiders’ de facto ball handlers, and in key moments this season the ball has been in his hands and he’s gotten the job done, whether it’s making a key shot or a key pass.

Kansas: Kansas has achieved a fine balance in its two Big 12 Tournament games. Against TCU, along with Agbaji’s 22 points, the Jayhawks got 15 points from Mitch Lightfoot and 10 points from Remy Martin. Eight different Jayhawks scored, but the Martin development is encouraging for the Jayhawks. He’s been limited for two months with a knee injury he suffered at the start of Big 12 play. On Friday he actually came to the interview room after the game and declared himself 100 percent. Martin was a starter and significant contributor before the injury. His 10 points was his most since a 15-point game in mid-December. If he can be this kind of player off the bench, then Kansas becomes more dangerous in the NCAA Tournament. With the limitations to forward David McCormack, Martin’s return to active duty is a welcome one.

Texas Tech: What would a Big 12 title mean to the Red Raiders? Head coach Mark Adams talked about his bunch of ‘no-name guys’ who have taken on the challenge of playing at this level and that it would be great to see them cut down the nets on Saturday. It would be a great reward for the 65-year-old Adams, too. Adams earned the Heartland College Sports Coach of the Year Award. As the season evolved, the Red Raiders ended up with a half-dozen players that averaged at least eight points per game, and a defense that is hard to goad into mismatches. The Red Raiders are at full strength and playing the best defense they’ve played in weeks.

Kansas 73, Texas Tech 68. I have a hard time betting against Kansas in Kansas City. But these teams have played two classics, and a third appears in the offing.