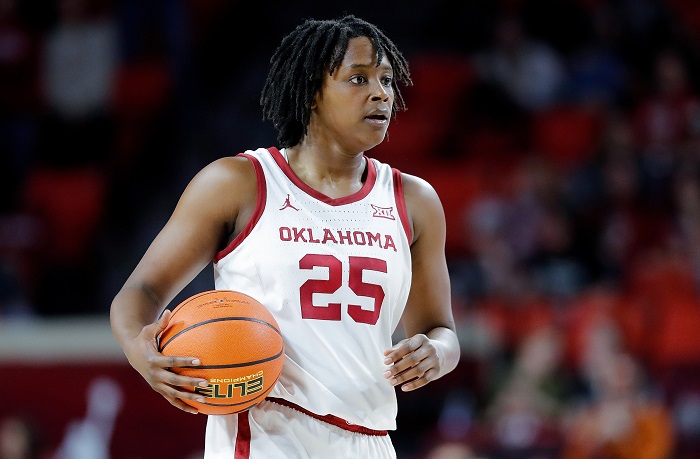 Here is everything you need to know about the Oklahoma Sooners and the IUPUI Jaguars in our Oklahoma vs. IUPUI NCAA Women’s Tournament preview.

How They Got Here: Oklahoma received an at-large bid out of the Big 12. IUPUI won the Horizon League Conference’s automatic bid.

Winner Gets: A second-round meeting with the Notre Dame-UMass winner on Monday.

Oklahoma F Madi Williams: Taylor Robertson gets a little more attention because she holds the Big 12 record for most 3-pointers, but if you watch the Sooners play you know their leading scorer and rebounder is Williams, who averages 18.2 points and 7.2 rebounds per game. A finalist for one of the nation’s top awards, the Cheryl Miller Award for the nation’s best small forward, Williams already has All-Big 12 First Team honors for the second straight season and a spot on the Big 12 All-Tournament team. In fact, she was dominant even in defeat against Baylor in the Big 12 Tournament semifinals, scoring 33 points and grabbing eight rebounds in a 91-76 loss.

IUPUI F Macee Williams: How good is Williams? She’s the four-time Horizon League Player of the Year. According to IUPUI sports information, is only the fourth Division 1 women’s basketball player to be named conference Player of the Year four times. This season she was good enough to earn honorable mention all-America status from the Associated Press. She’s the Jaguars’ all-time leader in points and rebounds. In 2021-22, she had 10 double-doubles and averaged a double-double with 18.7 points and 10.6 rebounds in 26 games. Williams led the Horizon League in rebounds per game and field goal percentage at 64.9 percent. She also averages 2.1 assists and 1.4 steals per game. She might be the best player you haven’t seen yet this season.

Oklahoma: The Sooners are back where they belong after a three-year absence from the NCAA Tournament. While OU is about to make its 22nd appearance in the NCAA Tournament, 20 of those appearances came under the legendary Sherri Coale, who retired after last season. In her place, first-year coach Jennie Baranczyk has executed one of the best turnarounds in the country, winning more games than any first-year OU women’s coach and helping the Sooners host first- and second-round games for the first time since 2012 (and the Sooners are 8-2 at home in the NCAA Tournament). With Williams, Robertson, Skylar Vann and others, OU’s 83.3 points per game rank fourth nationally, as does its 19.1 assists per game.

IUPUI: The Jaguars have been good for three seasons, but this is the first time they’ll play in the NCAA Tournament. It’s a watershed moment for the program. Williams is the team’s focal point, but she’s far from the only scorer on the team. Rachel McLimore averages 12.8 points and Rachel Kent averages 10.6 points. But where the Jaguars excel is on defense, specifically at the arc, where they hold opponents to 24.8 percent shooting from the 3-point line and are No. 24 in the nation in scoring defense (55.7 points per game). Plus, if you don’t guard them at the 3-point line, they can hurt you, too. The Jags shoot 36.7 percent from there. They don’t score quite like the Sooners, but they average 70.4 points per game.

While Oklahoma and IUPUI have never met, the Sooners are 3-0 against the Horizon League all-time.

Oklahoma 84, IUPUI 68. I think this game will be close for a half, thanks to IUPUI’s defense. But the Sooners use their exceptional offense to pull away late.