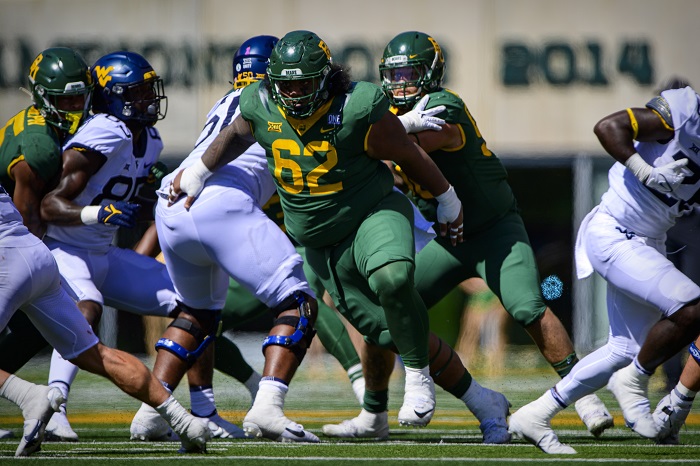 The reigning Big 12 champions are coming off a 12-2 season that not only included the Big 12 Championship win over Oklahoma State, but also a Sugar Bowl victory over Ole Miss.

Head coach Dave Aranda just finalized an extension to remain the Bears coach through 2029, which is a huge win for Baylor athletic director Mack Rhoades. “Dave has brought unprecedented success to our football program both on and off the field,” Rhoades said in a statement following the extension announcement.

Now, Aranda and the Bears are gearing up to defend their title, and immense talent and experience in the trenches will help them do just that. With spring football scheduled to get started on March 22, it’s time to give you a few things to watch for as they work towards the annual Green & Gold game on April 23rd.

Will Blake Shapen Push Gerry Bohanon for the Starting Job?

Blake Shapen, a freshman quarterback from Shreveport, Louisiana, was thrust into action by an injury to starter Gerry Bohanon in the K-State game. All Shapen did was complete 72% of his passes through three games with 5 touchdowns and no interceptions, including completing 82% of his passes and throwing three touchdowns in the Big 12 Championship. Now, Bohanon did return to start the Ole Miss game for the Bears, but there were times when Shapen was under center that the Baylor offense was humming to a different tune than it did under Bohanon. Do I believe Bohanon is the starter going into the spring? Absolutely, he has been a lightning rod of leadership for this Bears team. However, the skill that Shapen showed in his short time under center cannot be ignored. I expect to see a quarterback battle in Waco this offseason, with Bohanon edging out the talented sophomore.

Experience and Talent in the Trenches

As I eluded to earlier, Baylor returns a lot of experience upfront, which is usually an indicator of a strong team overall. Baylor will return four of its five starters along the offensive line, including 2021 Big 12 Offensive Lineman of the Year Connor Galvin. Returning 80% of the offensive line that paved the way for the Big 12’s top rushing attack in 2021 is a really good place to start for the Bears and it should be more of the same in 2022. Defensively, the Bears added one of the top transfers in the nation with Tulsa’s Jaxon Player coming back home to Waco. His addition alongside 2021 Big 12 Defensive Newcomer of the Year Siaki Ika makes the BU defensive the standard in the Big 12 and one of the best in the country in 2022. Expect Baylor to exhibit strengths along both fronts in the spring and build a great nucleus for the team to build around next season.

How Will Baylor Replace Jalen Pitre and Terrel Bernard?

This question will likely be the biggest issue that Baylor has to face going into the 2022 season. One could argue that finding a replacement for Abram Smith/Tresten Ebner will be the biggest issue, but that offensive line will give them success with whoever they plug into the backfield. Terrel Bernard was the leading tackler for the Bears in 2021, and also piled up 12.5 TFL’s. Jalen Pitre was named the Big 12 Defensive Player of the Year and a First-Team All-American. Those are big shoes to fill. When looking at the roster for replacements, the first name that pops out is Lorando Johnson. Johnson will be tasked with replacing Pitre at the nickel position which is a big ask for anyone. Dillon Doyle returns at linebacker for BU, but who will replace Bernard is still a mystery and will be something to keep an eye on throughout spring practice.