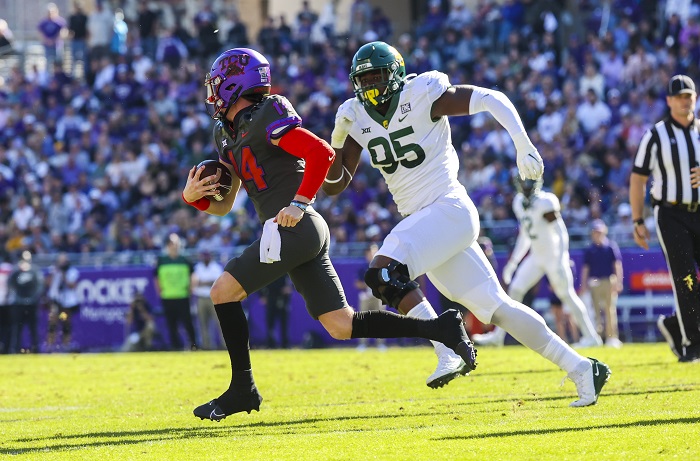 TCU will start the 2022 season under a new head coach for the first time in more than 20 years as Sonny Dykes is the new head man in Fort Worth and has brought plenty of excitement with him from SMU.

Last season, TCU went 5-7 and missed out on bowl season for just the fourth time in Gary Patterson’s 21 year stint. Obviously, getting on the winning side of .500 would be a great start under the new regime in 2022 and should be an attainable goal for this squad.

The Horned Frogs will likely be explosive offensively under Dykes, but the main issue for TCU last season was the defense, particularly against the run. In fact, TCU ranked 122 out of 130 teams against the run and gave up 222 yards rushing per game. Fixing the rush defense has to be one of the top priorities for Dykes staff this spring.

TCU fires up spring football on March 22, and with that, here are thre things that you should be watching for as Dykes’ squad puts on the helmet and shoulder pads for the first time.

Back in December, head coach Sonny Dykes announced that the quarterback battle would be wide open going into the offseason. There are two candidates to win the competition in Fort Worth, not including incoming freshman Josh Hoover. The 2021 starter, Max Duggan is an excellent leader and outstanding athlete, but showed a tendency to miss some throws last season. Sophomore Chandler Morris might have the higher ceiling in a Sonny Dykes’ offense, as the talented Oklahoma transfer exhibited his abilities in a win over the Big 12 Champions last season. Morris was electric, going 29-41 for 461 and two scores, adding 11 rushes for 70 yards and a score on the ground. Whoever comes out on top, Dykes offense is extremely quarterback friendly and should help them succeed.

Can Joseph Gillespie Fix the Defense?

TCU went out and hired Joe Gillespie from Tulsa as their new defensive coordinator. Gillespie’s unit was 27th in the country in total defense in 2020 behind All-American linebacker Zaven Collins. In 2021, Tulsa’s defense fell to 56th overall in total defense. They were also 48th in rush defense this season, which is far better than TCU’s rank of 122nd. Gillespie will have access to better athletes at TCU and if he can implement his 3-3-5 scheme successful in year one it would make a world of difference in the outcome of games for TCU in 2022. The 4-2-5 scheme that TCU fans have watched for 20 years is out the window, and after last season I’m sure they aren’t soo upset to see it go. His scheme may take some time to catch on, but being from the Tulsa area, I can tell you that Gillespie is a hell of a coach and is well regarded around here.

Which Transfers Make an Immediate Impact?

TCU signed nine transfers in the 2022 class and many of them are expected to push for playing time immediately. Five defensive transfers have made the mover to Fort Worth: LB Terrence Cooks (Texas), S Ishmael Burdine (Missouri), S Mark Perry (Colorado), DL Lwal Ughuak (UConn), and LB Johnny Hodges (Navy). Perry, Cooks, and Burdine will certainly play a role right away, as the Horned Frogs’ defensive backfield will look completely different than it did in 2021. Offensively, the Frogs made four transfer additions: RB Trelon Burks (Arkansas), RB Emani Bailey (Louisiana), OL Alan Ali (SMU), and TE Jared Wiley (Texas). The loss of Zach Evans will certainly give Burks and Bailey a chance to play, but Kendre Miller filled in nicely last season with Evans out, so it could be a toss-up. Either way, several transfers are set to make an impact, and spring practice will be a great opportunity for them to do just that.