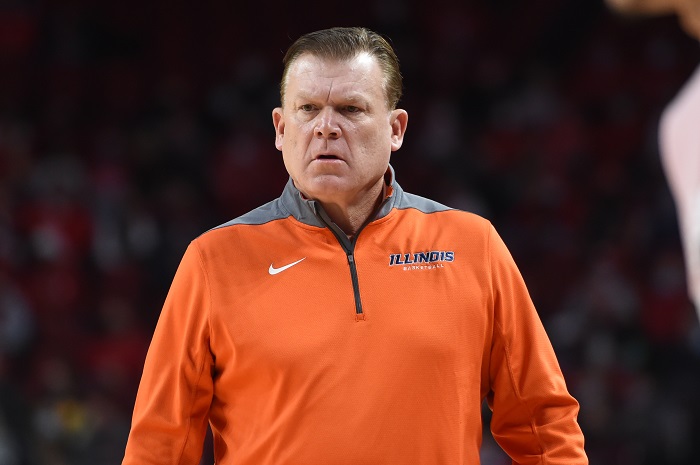 Did Brad Underwood really consider coming back home to Manhattan and coaching the Wildcats? We may never know the answer to that, but there certainly were rumors circling that he was the top target for the job before KSU landed Jerome Tang from Baylor.

It can be reasonably assumed that he at least received a phone call about the job, but in the end, he stayed with the Fighting Illini and it literally paid off for him.

After the K-State rumors officially died with the hiring of Tang, Underwood was in a great place to talk extensions with Illinois and he made the most of the situation.

On Wednesday, Underwood and Illinois agreed to an extension that will keep them paired until the 2027-28 season. The proposed contract, if approved by the UI Board of Trustees, calls for an annual $300,000 increase in base compensation and a $200,000 increase in the annual retention bonus. The extension is fully guaranteed through the first four years and would also increase Underwood’s buyout.

” Brad Underwood has led a remarkable resurgence of our men’s basketball program,” said University of Illinois Director of Athletics Josh Whitman. “Under his strong leadership, we have won Big Ten championships, posted one of the best three-year runs in the history of Fighting Illini men’s basketball and the Big Ten Conference, and reestablished ourselves on the national stage. Our work is far from finished, and Brad and I are hungry to continue on our upward trajectory next year and in the years beyond, but the foundation has been laid for sustained success long into the future. I am grateful to Brad, Susan, and the entire Underwood family for their commitment to the University of Illinois, and I couldn’t be more excited about continuing our journey together.”

Underwood led the Fighting Illini to the Big Ten Championship and a 23-10 overall record in 2021-22. Illinois ended the year ranked 19th in the AP Poll to secure their third straight finish in the Top 25, the program’s longest streak since 2000-06.